The Cryogenic Advanced Turbopump Test Stand facility uses liquid nitrogen, a cryogenic fluid (boiling point of -196°C ), to test the performance of the inducer and pump (inducer + main impeller) under the occurrence of harsh cavitation.

The liquid nitrogen test makes it possible to run a test in a wide range of temperatures (from the freezing point (-210°C) to close to the boiling point) by using a vacuum pump and temperature control mechanism. 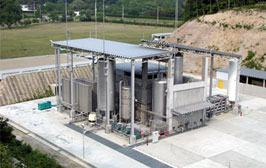