Meisei Electric, established in 1938, is a maker of observational equipment and electronic systems. In its past, the company produced and mainly sold various equipment and circuitry to the Nippon Telegraph and Telephone Public Corporation (now known as NTT), but today the heart of Meisei Electric’s business is systems that combine measurement technology with data analysis, such as its earthquake information system and the Automated Meteorological Data Acquisition System (AMeDAS) for the Japan Meteorological Agency (JMA).

Space is another key line of business, which accounts for nearly 20% of the company’s sales. Meisei Electric has been in the field of Japanese space development since the dawn of the country’s space program, when Hideo Itokawa of the Institute of Industrial Science at the University of Tokyo developed his Baby Rocket (the successor to Pencil Rocket). Japan’s first satellite, OHSUMI , was equipped with a Meisei Electric-made directional coupler for its antennas. Ever since, most of Japan’s scientific satellites and Earth observation satellites have been equipped with Meisei Electric’s observational equipment. For example, eight of the fifteen observational devices on Kaguya, the Moon-orbiting satellite, were supplied by the company.

Recently, Meisei Electric has set out to develop and manufacture ultra-small satellites. The company plans to make itself stand out from other satellite makers by leveraging its experience with various observational equipment and the like. 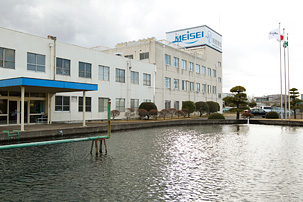 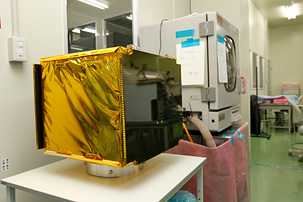 This life-size model of ultra-small satellite now under development is a cubic shape that is 50 centimeters along each dimension. 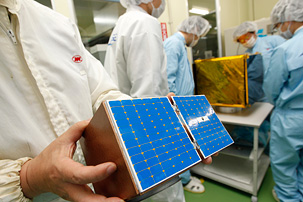 The WE WISH ultra-small satellite, shown here as a model, is a 10-cm square. 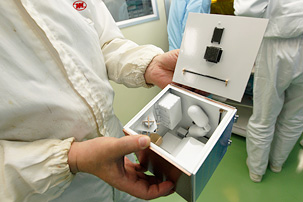 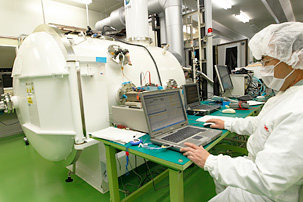 Meisei Electric installed a thermal vacuum chamber with a diameter of 1.2 meters to replicate the environment in space in order to develop the ultra-small satellite. 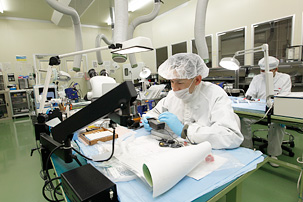 All space equipment is built in Class 50,000 to 100,000 clean rooms. The photo shows a worker replacing digital camera parts with those for use in space on Kibo, the Japanese Experiment Module (JEM).

Optical systems assembly and other such work that demands a particularly clean environment is performed in a Class 100 clean booth. 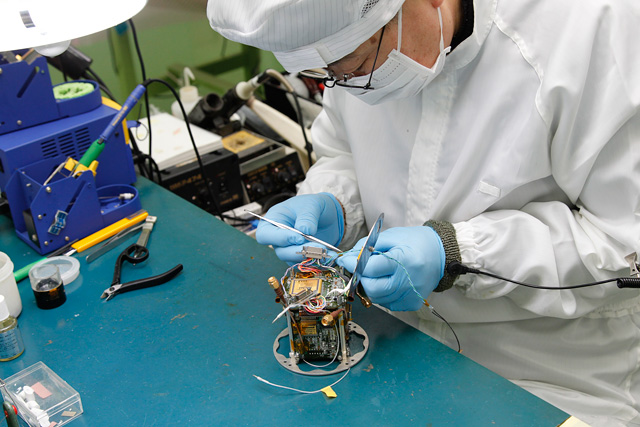 Here, a worker is assembling an observational device that will be loaded onto BepiColombo, the Mercury probe scheduled to launch in 2014. 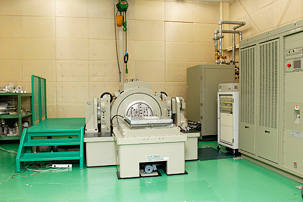 Meisei Electric has set up this 10-ton vibration test machine to examine the effects caused by vibrations during a launch. 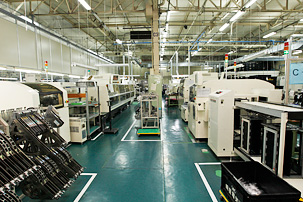 Offering systems to the world,including applications

--So Meisei Electric has been involved in Japan's space development since the beginning, hasn't it?

At first, our company's business started out in 1938 by working on military observational equipment using radiosondes. They would place it on a balloon and send it up into the sky to check atmospheric conditions. Then after World War II we switched straight to working on radiosondes for the Japan Meteorological Agency (JMA).
After that, the Institute of Industrial Science at the University of Tokyo began developing a rocket. They launched the Baby Rocket, the successor to the Pencil Rocket, to measure data. That was when Dr. Hideo Itokawa was working in that field. Because of our experience with radiosondes, we were asked to help ensure transmission data from the rocket transceiver to the ground antennas.
The radiosonde has to function in environments ranging from up to 40 degrees Celsius on the ground to minus 100 degrees Celsius in the air. We were the company in Japan at the time making machinery that operated at an altitude of 30 kilometers, right at the edge of space.
Japan's first satellite, OHSUMI, carried our company's directional couplers for its antennas. Starting with Kyokko, the aurora observation satellite launched in 1976 by the University of Tokyo's Institute of Space and Astronautical Science (ISAS; now part of the Japan Aerospace Exploration Agency/JAXA), most space telescopes and Earth observation satellites have carried our observational equipment.

--It was also on Hayabusa, the asteroid probe, wasn't it?

Hayabusa carried our X-ray fluorescence spectrometer to figure out the composition of ITOKAWA, the asteroid the probe visited. When X-rays from the Sun hit Itokawa, they get reflected at different wavelengths. We could find out what substances are on Itokawa by observing those wavelengths.
Because the X-ray fluorescence spectrometer's results were the same as the analysis of the extremely small sample that Hayabusa brought back, we confirmed the material's identity as coming from Itokawa.
Both Hayabusa and Kaguya carried detectors that used an X-ray charge-coupled device (CCD), and Kibo, the Japanese Experiment Module (JEM) on the International Space Station (ISS) uses the Monitor of All-sky X-ray Image (MAXI).

--Do you use the techniques you've developed in space in other fields as well?

Yes. For example, we applied such techniques to the SACLA X-ray free-electron laser's X-ray scattering detector, which was developed jointly by Riken and the Japan Synchrotron Radiation Research Institute (JASRI).
ISAS researchers are always trying to shed light on unknown fields. They are continuously trying to be the world's best in many fields.
That's why our observational equipment is never the same. Not completely changing, but rather we have to keep redesigning and reassessing because circumstances dictate last-minute changes that force alterations to specifications.
It is often said that the technology used in space applications is mature, because a basic part of this field is that it demands high reliability more than impressive specs. For our space equipment, for example, we use mature technology in our processing circuits. However, for our sensor components and peripheral circuitry, we are always assessing cutting-edge technology to make sure it can withstand use in space in order to make first-of-its-kind observations.
Lately we've been using commercially available off-the-shelf products as much as possible to cut costs. But even so, there are difficult conditions in space such as air pressure, temperature changes, radiation and vibrations during launch that require highly reliable and irreplaceable parts. As an example, Kaguya is equipped with a commercial high-definition camera, but the circuitry and chips are improved for use in space.
Because we assess new technology as we use it, we can assess which ones can be used in space and build up our knowledge on improving them. We also take advantage of this strength when using commercial products in space. 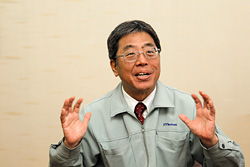 --Meisei Electric has also gotten into the business of ultra-small satellites as of late.

We believe that if we can use our experience creating observational equipment and the like, then we may be able to distinguish ourselves from our competitors. Until now, satellites have been designed around a central bus unit, to which the appropriate payload is attached. We are a payload maker, so first we're developing cubic ultra-small satellites 50 centimeters in each dimension that are based on their users' missions.
In May 2011, three satellites were selected for a miniaturized satellite release mission on Kibo, one of which was proposed by us. Its name is WE WISH. This satellite 10 centimeters in each dimension will be released in the fall of 2012.
We have many technical goals such as demonstrating an ultra-small thermal infrared camera, but another objective is to contribute to technical education in our community.
In 2010, we partnered with the local Isesaki municipal board of education and the Gunma Astronomical Observatory to hold an educational event called the Isesaki Science Seminar. We exhibited a thermal model, the Small Demonstration Satellite 4 (SDS-4), and the elementary and junior high school students were very interested in it. WE WISH hadn't passed its review yet at that time, but we told them, "An ultra-small satellite from Isesaki is going to go into space in two years or so." I'm really glad it passed! (Laughs)

--In the future is Meisei Electric going to strengthen its space business beyond serving public sector demand?

We're considering providing solutions, including applications, to customers across the globe. When it comes to applications like meteorological observations and forecasting, systems that link meteorological observations made from space with ground-based observation systems are very effective. Another one of Meisei Electric's strengths is the knowledge we have about linking these kinds of applications in space and on the ground. We're going to expand applications beyond the field of meteorology and into disaster prevention, the environment, water and so forth.
Japanese makers are still in a weak position in the global commercial satellite market. Each one of us has our technological strengths, but we haven't demonstrated an ability to coordinate with each other.
Space development is not only supported by big companies. Mid-sized firms with their own strong specialties also contribute. If we could create a synthesis of the strengths of all of Japan's big and medium-sized companies, then I think Japan could be a global player in commercial satellites. 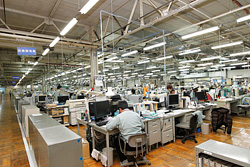