Utilized in research and development, including for supersonic aircraft
Realize uniformity with world-class low airflow turbulence

The Mach number is set from 1.4 to 4.0 using a two-dimensional variable nozzle of the upstream part of the test section. The range for the Reynolds numbers, which are used to determine the Mach number, is 2 to 6 × 107 (1/m). The maximum airflow duration is around 40 seconds. It is possible to run the test more than eight times a day.

In fiscal 1999, a complete renovation was conducted of the upper portion of the tunnel and the control system with an aim on improving the wind tunnel function and airflow characteristics. This realizes a high operating rate, owing mainly to the automation of a change in Mach numbers, and uniformity with world-class low turbulence. 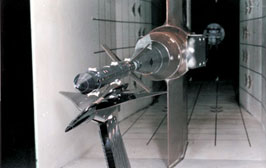