Leveraging accumulated expertise to open up a new field of business.

Sumitomo Precision Products is a company with a long, proud history of involvement in the field of aeronautics. It can trace its roots to Sumitomo Copper Plant, a company that was established in 1897 to process the copper extracted from the Besshi copper mine owned and operated by the Sumitomo Zaibatsu. The company gradually began the manufacturing and processing of metal alloys in general, became Sumitomo Metal Industries in 1935, and developed a high-strength aluminum alloy referred to as extra-strength Duralumin (ESD) in 1936. ESD was used as the main wing spar material for the Zero fighter planes during the war. For its development, it has been chronicled that fragments of a German Zeppelin airship that went down on the outskirts of London were obtained and analyzed.

In 1961, the company was split off from Sumitomo Metal Industries and commenced operating in its current category of business. The company’s business grew as it shifted away from aircraft propellers and continued to enter new fields by developing aircraft landing gear, heat exchangers for plants, heat exchangers for space applications, and ozone generators. Against the backdrop of these developments exists the expertise obtained through the steady accumulation of metal alloy processing and process management techniques. The company mastered the technologies required for a given field and entered a new field to which the expertise it had already obtained could be applied. This cycle, by which the company obtains additional expertise to enter a new field, is what has underpinned its business.

The same can be said of the new fields into which the company entered since the 1990s. The expertise cultivated through plant technologies and ozone generators was leveraged to develop semiconductor processing equipment. By combining semiconductor processing and advanced process management techniques with gyroscope technology obtained through collaboration with British Aerospace, the company entered a market with foreseeable growth, namely MEMS (micro-electro mechanical systems) gyroscopes. Through the development of the MEMS gyroscope for space applications, the company is currently hoping to achieve higher performance. If successful on this count, demand for civilian (consumer) versions of this product could potentially be stimulated. 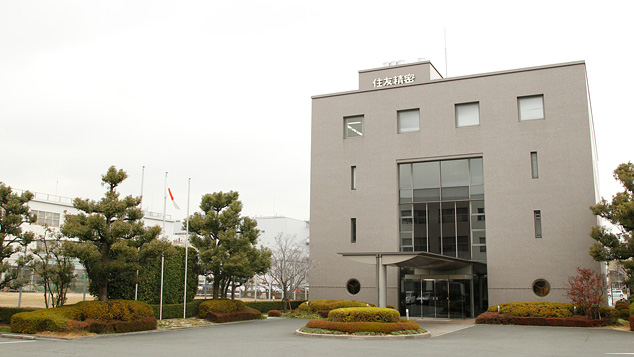 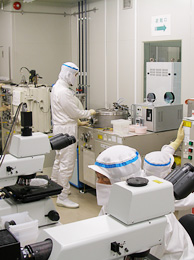 The site where MEMS (micro-electro mechanical systems) gyroscopes are developed and manufactured. These photographs show the processing of upstream silicon wafers in a class 1,000 clean room. 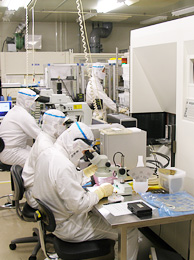 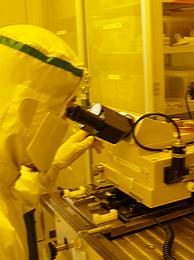 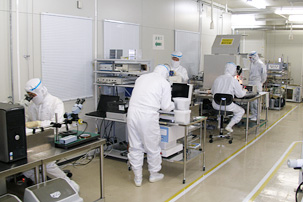 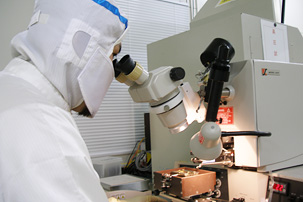 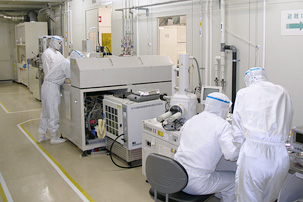 Using an electron microscope and other instruments, the precision with which MEMS units are processed and assembled is subject to inspections. 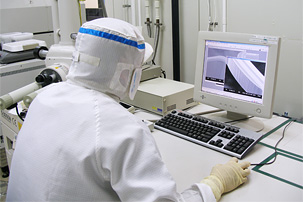 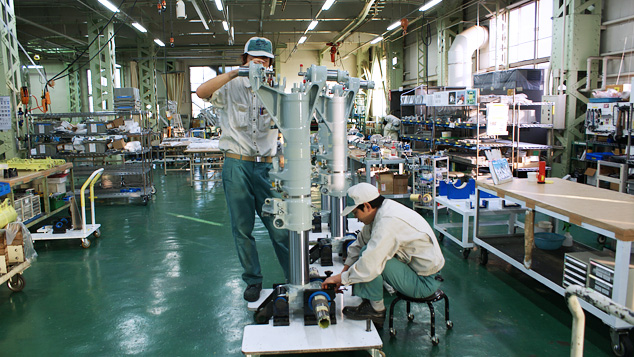 Products in the fields of aeronautics and space are manufactured at the company’s Amagasaki head office and plant. This photograph depicts the landing gear of an aircraft being manufactured. 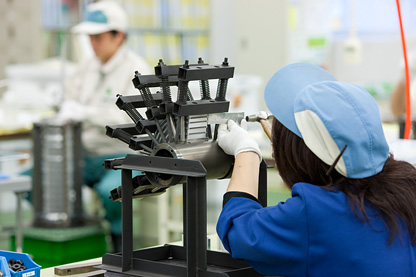 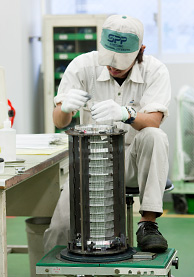 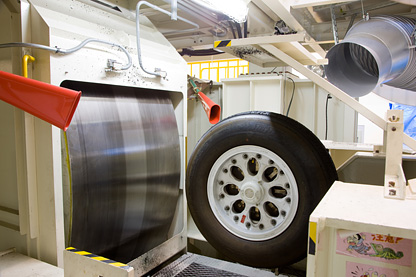 Equipment with which aircraft landing gear is tested. Testing is conducted by simulating conditions in play when an aircraft takes off or lands. 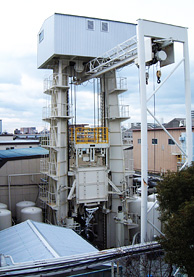 We have taken on the challenge of
developing an ultra-small gyroscope
that can be used in space.

--The production of aircraft propellers was originally your primary focus of operations, was it not?

While we became known as Sumitomo Precision Products in 1961, we can trace our roots to Sumitomo Copper Plant, which was established in 1897. That company began manufacturing propeller materials in 1925. While propellers continued to be manufactured and repaired after the war, the production of aircraft landing gear commenced with the arrival of the jet age by leveraging technologies for the manufacture of propellers. Landing gear for aircraft now constitutes one of our flagship lines of business.

--Around when did you enter the field of space?

The 1980s. In 1988, we established a section known as the Aerospace Development Office to fully engage in efforts to enter this new sector. We began with electromagnetic valves for solid-fuel rocket propulsion systems and subsequently took an order for heat exchangers mounted on an H-II rocket (launched in 1994) as well as an order for heat exchangers for the LE-7A first-stage engine of the H-IIA/B rocket. This is a device that heat-vaporizes liquid oxygen to generate gas for pressurizing the liquid oxygen tank. We continue to manufacture the device to this day.

--Was the technology for your heat exchanger developed for the LE-7?

No. We had already been manufacturing heat exchangers for everything from aircraft to low-temperature industrial processes, as well as heat exchangers for vaporizing liquefied natural gas and simply developed a heat exchanger for space engines by extending the relevant technology. A heat exchanger constitutes a multilayered brazed structure consisting of a stack of multiple brazed parts. Once it has been manufactured, it is not possible to directly confirm whether the brazing has been properly performed. Since multiple brazed parts are stacked on top of one another, you would not be able to identify specifically where a defective part is located even if you could obtain images of possible defects with an x-ray device. Quality control is maintained by strictly managing the brazing process when the manufacturing process is actually being carried out. It is this process management expertise that is applied on a shared basis to aircraft landing gear. An aircraft landing gear system must be durable and lightweight to boot. To illustrate, the steel used for the Tokyo Skytree corresponds to a tensile strength of 1 GPa. In contrast, the high-tensile steel used for aircraft landing gear systems can correspond to a tensile strength of as much as 2 GPa.

As high-strength steel is difficult to weld, it is fabricated into an integral part with the use of advanced processing technology. While it is also described as being susceptible to cracking, it should be noted that if any internal stress greater than required remains during the manufacturing process, the product will be prone to cracking. In order to manufacture lightweight, durable landing gear while ensuring that no invisible internal stress remains, advanced process-management expertise is essential. This expertise can also be applied to the manufacturing of heat exchangers. 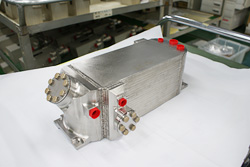 --Is it true that you leveraged technologies for civilian (consumer) purposes to enter the field of space?

In general, products for space applications can only be used once. In contrast, aircraft products are used repeatedly for the life of the aircraft. Aircraft landing gear must be able to withstand 50,000 landings over a 10-year period. It’s a bit of an exaggeration, but it is necessary to design and manufacture such products in a way that renders them infallible up to the very threshold of what is required, so that it would be permissible for the fifty thousand and first unit to break. Products for space applications must be designed to work properly the one and only time they are harnessed for the mission at hand.

--You are also apparently producing a new type of gyroscope these days. Could you elaborate?

In 1992, we began developing a gyroscope for use in navigation and control systems employed by aircraft and other flight vehicles in collaboration with British Aerospace, a company based in the United Kingdom. In the meantime, we also made the equipment for manufacturing semiconductors in 1995. In this connection, we forged ahead with ultra-small MEMS (micro-electronic mechanical system) gyroscopes manufactured by using a semiconductor-manufacturing process by integrating these two technologies. These ultra-small gyroscopes measure between approximately 5 square millimeters and 15 square millimeters. We commenced production as sensors for automobile sideslip prevention in 1998. Incidentally, I should note that there are five individual MEMS gyroscopes made by our company incorporated into each Segway two-wheel riding vehicle from the American company. MEMS gyroscopes are spread across a wide range of applications and can be found in everything from high-precision aeronautic and defense applications to smartphones and other civilian (consumer) products. We began research this year on MEMS gyroscopes for use in space by taking advantage of JAXA’s open lab program. 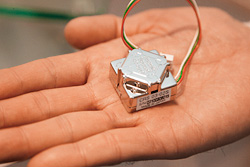 --What sorts of specifications would be required to be met by a MEMS gyroscope for space applications?

Measurement accuracy must be improved significantly. We aim to carry out research over the next three years to increase the performance of MEMS gyroscopes by 10 times over current levels. By improving performance by this much, it will also become feasible to replace more conventional mechanical gyroscopes and optical fiber gyroscopes with MEMS gyroscopes. For this reason, we expect to see MEMS gyroscopes move beyond their use in space applications to become widely deployed in civilian (consumer) fields as well. 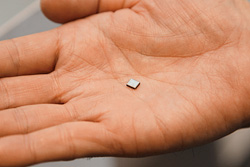