The world's only CdTe radiation detector manufacturer performs the processes from material refining to mounting.

The Astro-H X-ray astronomy satellite is scheduled for launch in 2015 and will carry advanced observation instruments—the company involved in the manufacture of one of the instruments onboard is located in Uruma City, Okinawa. Acrorad Co., Ltd., develops and manufactures cadmium telluride (CdTe) semiconductor-based radiation detectors. This company is characterized by the consistent process from refining of Cd and Te to mounting of CdTe devices with Si circuits and is the only company in the world making a profit among the manufacturers that offer such detectors.

CdTe, which is used for detectors, has the advantage of being able to achieve higher radiation detection efficiency and operate at room temperatures compared to silicon (Si) and germanium (Ge), which have been traditionally used. (For example, for Ge, a cooling device that uses liquid nitrogen at – 196ºC is required.) In addition, CdTe also features high density to achieve sufficient detection accuracy even though the device is thin. Approximately one millimeter-thick CdTe devices can detect X-rays.

The strong point of Acrorad is that it established the technology for manufacturing highly pure, highly resistive, and large CdTe crystals. This technology is supported by the company’s extensive expertise accumulated from over twenty years of research. Acrorad quality is supported by expert knowledge in the conditions that need to be met for sufficient crystal growth and the methods of forming electrodes, which cannot be obtained from patent information and articles. 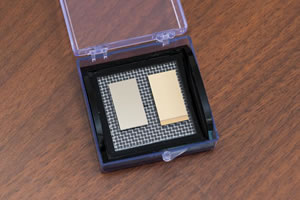 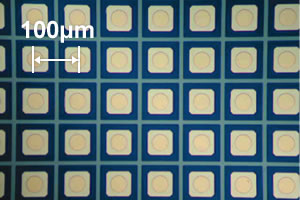 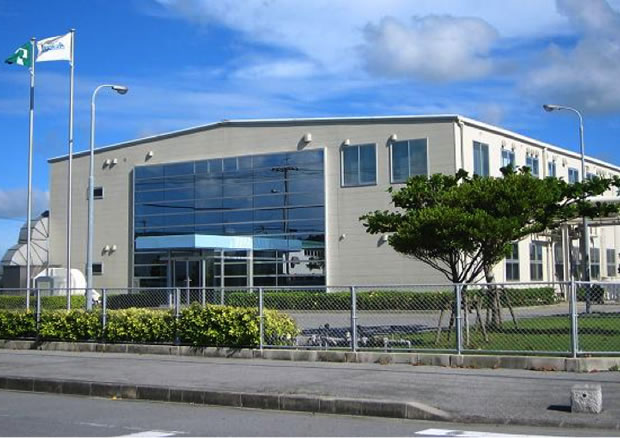 The Acrorad headquarters and plant in Uruma City, Okinawa. According to Acrorad, it had been in the red for the first eleven years since its establishment and experienced a cumulative deficit of up to 1.3 billion yen. As a result of a subsidy from the government and Okinawa Prefecture, as well as obtaining a loan from investors, the company became profitable in its twelfth year. Current plans are to expand the plant for mass production. 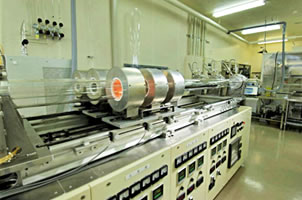 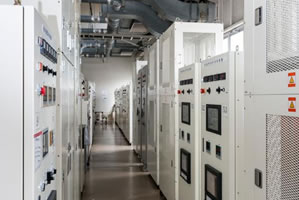 The purity of cadmium (Cd) and tellurium (Te) is increased from 99.99 % to as high as 99.9999% by using a zone refining system. After that, a crystal growing system (THM method) is used to grow a single CdTe crystal. It takes more than one month until the crystal grows to the size required for commercialization.。 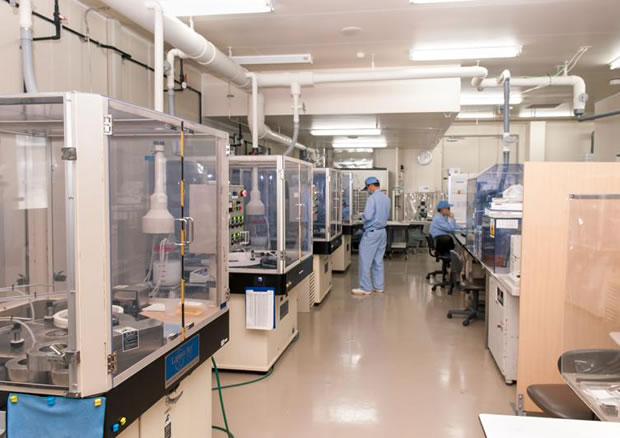 The clean room houses the machines for cutting column-shaped CdTe material and for polishing the wafers (strips). 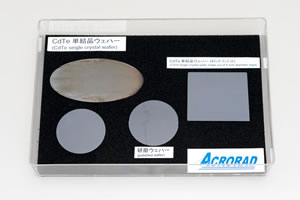 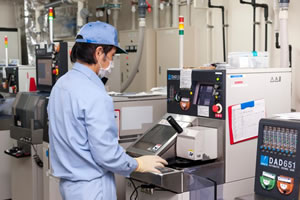 A CdTe wafer with formed electrodes is cut (singulation process).

A single CdTe crystal grown into a cylindrical shape is cut into 0.5–3 millimeter-thick wafers according to the intended use, and they are mirror-polished using a system to form electrodes. In the final stage, the quality and performance of detectors are examined carefully by human eyes to check for any cracked picture elements.

Participation in space developmentis an investment in the future.

Acrorad Co., Ltd., established the technology and know-how for mass-producing large, high-purity cadmium telluride (CdTe) crystals, and the company is the largest and only manufacturer in the world that carries out research and development of radiation detectors. We heard the story behind the development of the radiation detector loaded onto the Astro-H astronomy satellite that is scheduled for launch in 2015 as well as the involvement in space development.

--What are the core products of Acrorad?

Our core products are X-ray image detectors that are built into the panoramic X-ray equipment used in dental clinics. For dental radiography, X-rays that can penetrate the skull are necessary; however, there is a need to decrease the X-ray dosage as much as possible. So, CdTe-based detectors are sensitive and can detect clear images. Currently, our detectors are used in approximately 30 percent of dental panoramic equipment manufactured in the world and are also used in foreign substance test equipment for foods. 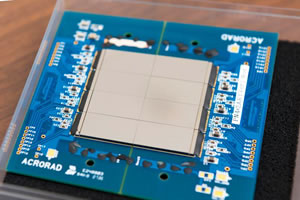 --What made your company undertake the development of radiation detectors?

The engineers that serve as key components of our company were originally from Nippon Mining Co., Ltd., (present JX Nippon Mining & Metals Corporation) and studied ways to utilize the byproducts generated in the process of refining metals.
Cadmium (Cd) is a metal generated in the process of refining zinc, and tellurium (Te) is a metal found in minute amounts in copper ore. CdTe is the compound of these two metals as a semiconductor that can detect infrared light, so steady demand for this metal as the substrate for infrared detectors and night-vision cameras was expected.
In addition, the CdTe semiconductor was already characterized by its high sensitivity to radiation at that time. However, in order to manufacture radiation reactors using this semiconductor, highly pure and highly resistive crystals that were large enough for detection were required. Since the technology for producing such crystals had not yet been established in the 1980s, we thought we could start a new business if we succeeded in the mass production of such crystals. So, we established Acrorad with twenty people, including seven engineers, in 2000. 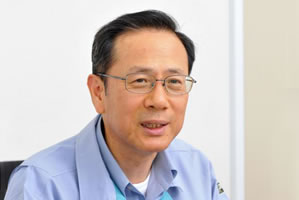 --What is the background to your launch into space development?

When a radiation detector manufacturer introduced us to a researcher from ISAS (Institute of Space and Astronautical Science) in 1995, we started to offer detectors for space development. In 1998, we received an invitation for bids for the Integral astronomy satellite from ESA (European Space Agency). As a result of that bid, our product, which provided better performance at a lower price than competitors’ products, was adopted. For the Integral satellite, we provided approximately thirty thousand detectors in one and one-half years for cameras carried aboard the satellite and for ground tests. At that time, information that there was a manufacturer with the technological capability to mass-produce radiation detectors using CdTe in Japan spread around the world. We heard that this satellite, which was launched in 2000, is still working after a substantial extension of its original operation period of two years.

--When did your company start to engage in space development in Japan?

Together with the researchers from ISAS, we continued our research for the Suzaku X-ray astronomy satellite, which was launched in 2005, and we aim to carry our CdTe semiconductor radiation detectors aboard the next X-ray astronomy satellite named Astro-H. So, we have been involved in Japanese space development for over ten years. The Astro-H satellite is scheduled for launch in 2015, and we have already delivered the semiconductor devices for detectors loaded onto this satellite. For this satellite, we used not only CdTe, but also other types of materials to produce detectors with a range of applications. As a result, we succeeded in improving the performance and decreasing the size compared to 15 years ago. 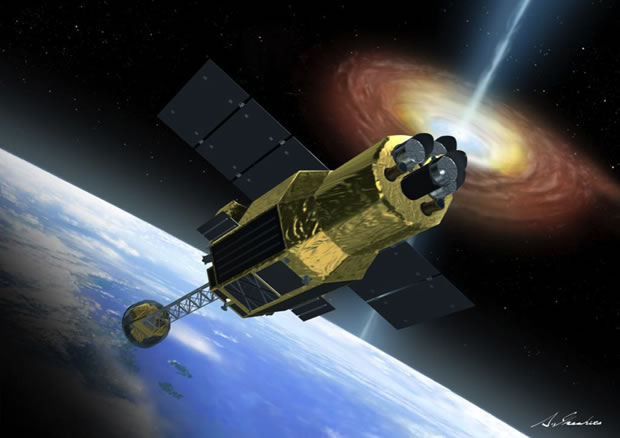 --What was the difficulty related to the research and development in particular?

It was very difficult for us to meet the very high performance requirements. For example, detectors are generally operated with a voltage applied, and some leakage current is inevitably generated during operation. This is permitted in the case of ordinary use, but for an X-ray astronomy satellite, we were asked to decrease the leakage current to one-hundredth because it could generate noise interfering with the observation. Of course, we make every effort to meet such requirements, but it was too difficult for us to intentionally manufacture semiconductor devices that could achieve such high performance. So, approximately only one out of ten detectors delivered was eventually carried aboard a satellite after examinations in the ISAS laboratory and in the process of assembling a satellite. 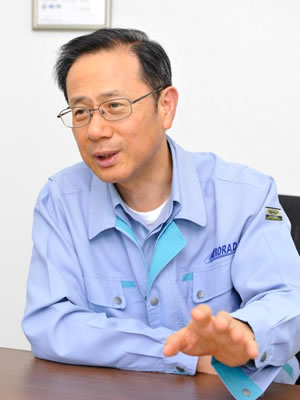 --Was it worth the effort?

Yes, we achieved new findings as the result of trial and error for meeting high performance requirements. For example, we obtained information on the conditions, environment, and manufacturing processes that could increase leakage current. We could feed back such information for commercial products used on the ground.

--What was the greatest result?

Based on a discovery made by a researcher from ISAS, we succeeded in stabilizing the performance of the detector. Originally, we thought that one hundred volts was the highest voltage that could be applied to one-millimeter-thick CdTe radiation detectors. However, the problem with this voltage was unstable X-ray energy distribution measurement called spectrum measurement. One day, we found the spectrum became stable when a researcher from ISAS applied a voltage of 500 volts. That was the moment our old idea was discarded. We were half in doubt as soon as we heard it. However, as a result of an improvement in our system to accommodate high voltages, we succeeded in stabilizing detector performance. The products where we use this result currently account for approximately one-half of our sales.

--Please tell us about the future business deployment of your company.

We believe that the potential need is in the security checks at airports, and our detectors can determine whether the contents of a plastic bottle are combustible or explosive or not to contribute to antiterrorism measures and a reduction of the burden on passengers. In addition, medical devices equipped with our detector decrease X-ray exposure levels compared to conventional products and still obtain clearer X-ray images. For example, different tissues are indicated in different colors, so doctors can interpret the images easily. We hope that we can meet every single legal requirement to commercialize these products by around 2020.
Furthermore, cost reduction is an important issue. We will work to reduce unit prices of products by mass-producing products through market expansion and reduce the number of defects by enhancing manufacturing technologies. 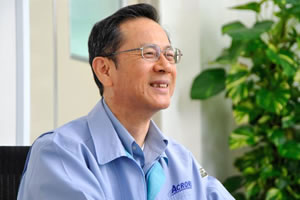 --What is the advantage of space development?

The advantage is that we can have the opportunity to learn about the practical ideas of other people. In other words, it is an investment in the future. Learning new ideas lets us determine what products will be produced in the future and the possibilities of our products. In addition, we have opportunities to start new research studies and seize new business opportunities through collaborative research with JAXA. This is a major advantage for us. Without the involvement of JAXA, radiation detectors, which are our current core products, would not be such high-performance and versatile detectors. In addition, since JAXA is not a private company, we do not compete with each other, which helps to protect confidential information related to research. So, we can say that JAXA is the only partner with whom we can conduct joint development. 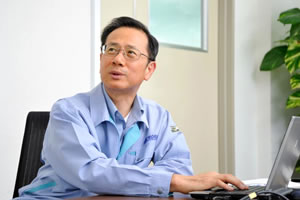 --Last, what do you expect from JAXA?

The X-ray astronomy satellite field is an area in which Japan is better at than other countries, so we expect future research and development including the Astro-H. We hope JAXA will tell the world that our products are carried aboard the Astro-H. In addition, we would like our products to be used in the next satellite.