Tohmei Industries, founded in 1965, is a mid-sized firm that designs and manufactures original and order-made equipment for materials, impact and performance testing and is also involved in general logistics by manufacturing reinforced cardboard and special containers. In the aerospace sector, Tohmei has performed assembly for the H-IIA/B Launch Vehicles, the large rocket, and the KOUNOTORI supply ship for the International Space Station (ISS).

Tohmei’s aerospace equipment manufacturing is based at its Chita Plant in Chita, Aichi Prefecture. A team of young employees averaging 30 years in age assembled KOUNOTORI in a temperature and humidity-controlled factory building.

The first thing new hires do is take around three weeks of instruction at the Training Center built next to the factory in order to acquire the advanced skills demanded by the aerospace field. The training is severe and some quit before they finish.

Tohmei Industries is a particularly fine manufacturer, even among others in Aichi, where the value of goods shipped is more than in any other Japanese prefecture. In 2008 Tohmei was designated an Aichi Brand Company. 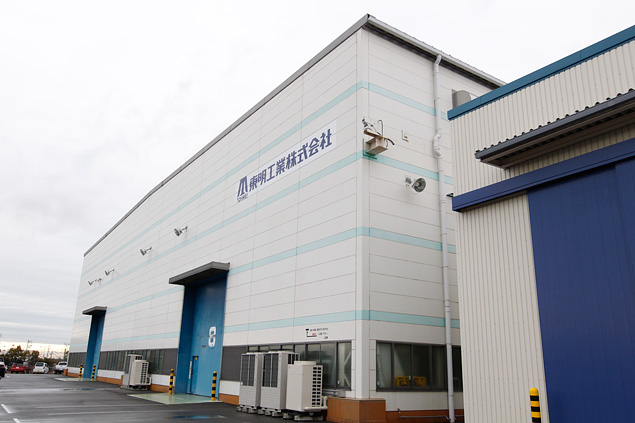 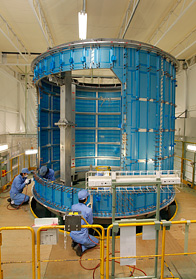 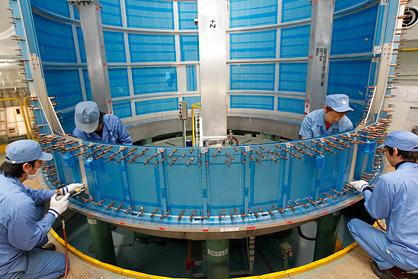 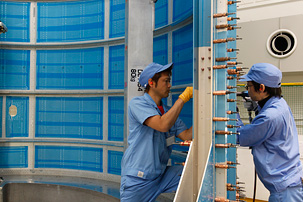 A team of two puts rivets into the non-pressurized section of a KOUNOTORI, which requires around the drilling of 38,000 holes. 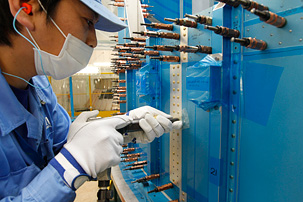 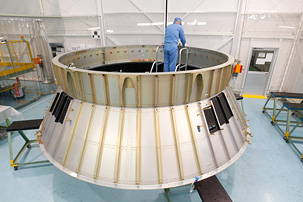 Frame assembly for a KOUNOTORI propulsion module, which is shipped to Mitsubishi Heavy Industries after testing finishes. 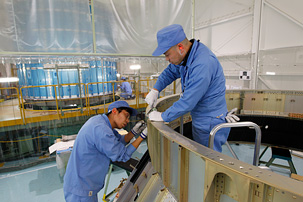 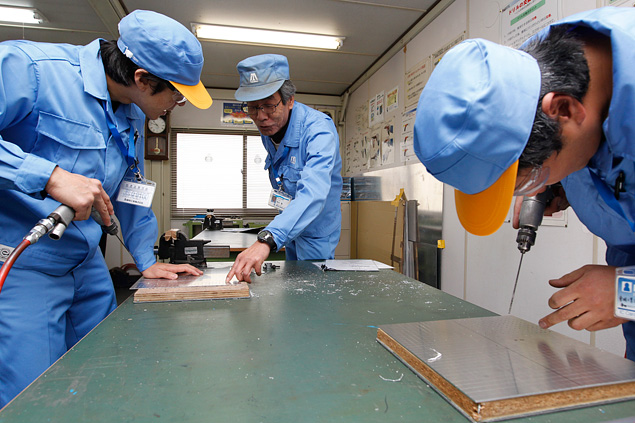 Using the high quality cultivated
by astronautics work in other fields

--Tell us about how Tohmei Industries got into the astronautics and aviation sectors.

We started out making wooden crates. Our previous president had a big dream and strong desire to enter the aerospace business. We aimed to get into this sector when we started doing aviation-related packaging, like for the Japanese-made YS-11 passenger plane and the small multi-purpose business jet from Mitsubishi Heavy Industries, the MU-2.
Then in 1980 we were able to take part in aircraft assembly at Mitsubishi Heavy Industries. That was around the time that it looked like Japanese companies would assemble U.S. aircraft manufacturer Boeing's large commercial airliner, the 777, an aircraft that is a big job to build.
So how does an unknown company like us get really good employees? My predecessor, who had lots of ideas, invested money - enough to construct a factory - to build a company dorm with private, air-conditioned rooms, something that not even big companies around here had at the time. That's how badly he wanted to get into the aerospace sector.
We built up a record of achievements and gained experience, constructed a plant in Komaki, Aichi Prefecture in 1987 and began assembling fuselages and wings at our own factory. The first thing we assembled was a pressure bulkhead for the P-3C anti-submarine aircraft.
We began assembling astronautics equipment in 1999. It all began when Mitsubishi Heavy Industries asked whether we could assemble panels for the H-II Launch Vehicle's engine. I think they trusted us because up until then we'd handled aircraft jigs and had done aluminum panel drilling, riveting and assembly.

At that time we'd also been asked by automobile makers whether we would do assembly. There were many nearby companies that had become big by working with automobiles.
Even so our previous president decided to invest in space. He compared it to a department store display window. You only set one up in a nice part of town, but it doesn't directly bring in any money. However, it is in fact profitable because it makes customers trust the department store and shop there. It's the same thing. 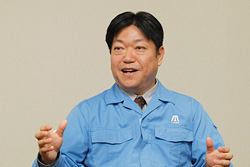 --What sort of astronautics equipment are you working on now?

In addition to assembly for the H-IIA/B Launch Vehicles, the big rocket, we also assemble the frame for the KOUNOTORI supply ship for the ISS. Our company takes care of most of the work for drilling and riveting aluminum parts and putting them together.
It's very hard to make a profit in the space business. Even so we keep on trying. That's because it demands the highest level of engineering. It's the same as when automobile manufacturers do F1 and other race cars and when parts makers do race car parts. It raises worker morale and your engineering level, resulting in a high status for your company.
Plus, the engineering and ideas to produce high quality that come from working on difficult jobs in the space sector also apply to other fields we work in, like aircraft, which is our main business. We're not content with the present. We always want to go "higher and higher," and that boosts our quality in the aircraft field.

--Aerospace is often talked about as one sector, but is the engineering in aviation and astronautics different?

They are. Astronautics demands higher quality.
For example, you can use an aircraft component even if it's a little off specs so long as a decision on the design concludes that it won't cause any strength or durability problems. And even if you don't use the part, many aircraft are made from the same series, so you can use the part in the next model and save on production time.
With astronautics parts, you can't do that at all. Making each one is a one-time thing, and you have to do it exactly according to design.
That alone makes the space industry a stressful one to work in. Assembly for the KOUNOTORI's especially so because you have to drill tens of thousands of holes and rivet them without a single mistake. It really wears out your nerves.
Of course aircraft assembly requires accuracy, but speed is also important. On the other hand, with astronautics you have to be careful, absolutely no mistakes allowed.
Learning top level quality control this way contributes to improving quality in our other manufacturing. Our logistics department takes work like imported part testing, storage, and shipping to customers, so it also helps with ensuring the reliability of imported parts. 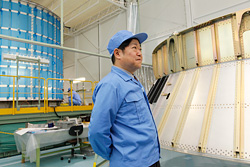 In 2010 we acquired PNC (based in Matsumoto-shi , Nagano Prefecture), a company with carbon-fiber-reinforced polymer (CFRP) molding manufacturing technology, as a subsidiary, along with a CFRP molding manufacturer's Ibaraki plant (based in Ibaraki-shi, Osaka Prefecture) in 2011.
Both companies have autoclaves that can mold carbon-fiber-reinforced thermoset resin and the Ibaraki plant has a press that can mold thermoplastic resin, giving us the ability to produce CFRP aerospace components.
CFRP parts are going to spread very fast from aerospace to the railway and automotive markets, so we've determined that there will be more room for companies to get into that business.
And we are continuing to get involved in high-value added processes other than assembly, such as by building a new coating plant in 2011.