Hamamatsu TV, the predecessor of Hamamatsu Photonics, was established in Hamamatsu, Shizuoka Prefecture in 1953 by three people including Heihachiro Horiuchi, a disciple of Professor Kenjiro Takayanagi at the Hamamatsu College of Engineering (now the Faculty of Engineering at Shizuoka University), the “father of Japanese television” who built the world’s first cathode ray tube (CRT) television. Since then, the company has established a name for itself through research and development of optical-related products including phototubes, as well as photomultiplier tubes (PMTs), video camera tubes, photodiodes, photonic integrated circuits and image-sensing semiconductors and other products.

Hamamatsu Photonics has recently expanded into the medical and bio fields by using optics and X-ray technology to make inspection and testing equipment. In 1996, the company delivered 11,200 20-inch PMTs for Super-Kamiokande neutrino detectors. It is known that Professor Emeritus Masatoshi Koshiba of the University of Tokyo won the Nobel Prize in Physics in 2002 for his research using this equipment. 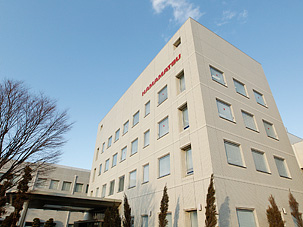 The company’s headquarters in Hamamatsu is the core of its image-sensing semiconductor business. Most of its space sensors are also made here. 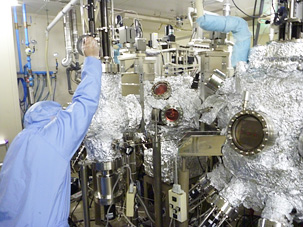 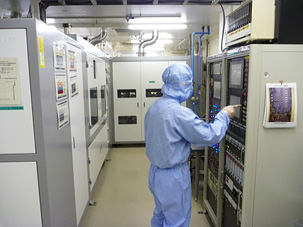 This is a metal organic chemical vapor deposition (MOCVD) device. Along with the MBE device, this is used to grow crystals. 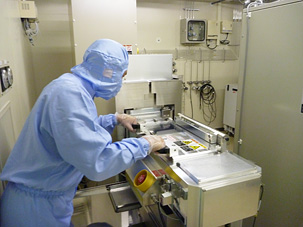 Ions are injected into wafers to change semiconductor properties.

After optical semiconductor device wafers are completed, the device’s optical properties are measured and assessed. 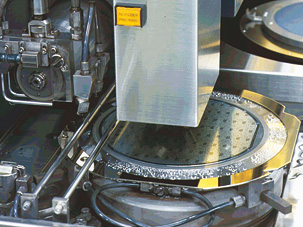 After wafers are made, they move on to the assembly process, where they are cut into chips by circular rotary blades.

The die bonding process affixes each chip to a metal base. 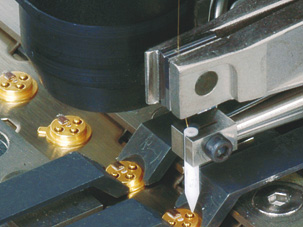 The wire bonding process connects the metal base and the chip with a gold wire. 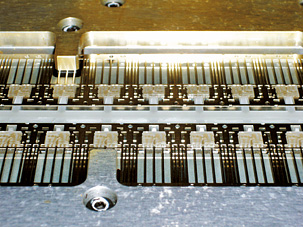 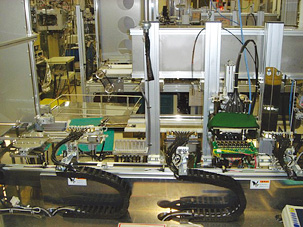 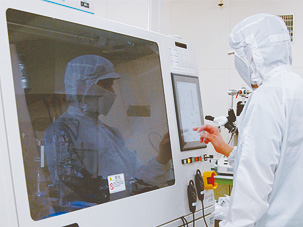 Flip chip bonding joins chips with a board in a chip size package production process that employs small and thin chips as needed.

--When did Hamamatsu Photonics begin working in the space business?

In 1967, we got a request from the former National Aerospace Laboratory at the University of Tokyo to develop the XY Tracker to track rockets launched from the Uchinoura Space Center in Kagoshima Prefecture. At the time, NASA (the National Aeronautics and Space Administration) used series of photographs to track rockets, but we developed a tracking system using a TV camera with a high frame rate that was recognized for surpassing NASA's technology.
After that, in 1978 we worked on ultraviolet imaging equipment for the Kyokkou aurora observation satellite, and in 1985 for the Sakigake test probe to observe Halley's Comet. This equipment used photomultiplier tubes (PMTs), but after Midori, the Advanced Earth Observing Satellite (ADEOS) was launched in 1995 with the Ocean Color and Temperature Scanner (OCTS), we started using image-sensing semiconductors, which were all newly developed by us.
Our X-ray charge-coupled devices (CCDs) were also installed on the Monitor of All-sky X-ray Image (MAXI) on board Kibo, the Japanese Experiment Module (JEM) that is part of the International Space Station (ISS), as well as the Hayabusa asteroid probe launched in 2003 and the Kaguya moon exploration satellite launched in 2007. In addition, our near-infrared sensors that use the semiconductor indium gallium arsenide (InGaAs) were loaded onto Ibuki, the Greenhouse gases Observation SATellite (GOSAT) that launched in 2009, and Akatsuki, the Venus Climate Orbiter that launched in 2010. We are currently developing a large X-ray CCD for the Astro-H X-ray observation satellite.

--What did your sensor installed on Hayabusa do?

Actually, Hayabusa had both an X-ray CCD and an InGaAs near-infrared sensor with built-in complementary metal oxide semiconductor (CMOS) readout circuitry. Observations of asteroid Itokawa's surface with the near-infrared sensor found that it contains the minerals olivine and pyroxene, while CCD observations found surface deposits of magnesium, aluminum and silicon.
Compared to medical X-ray CCDs, those for use in space can detect very small amounts of energy. This is why we change semiconductor composition and structure to make highly sensitive X-ray CCDs with superior resolution. 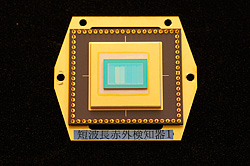 --So even though you're still using X-ray CCDs, you're always developing new ones.

Requirements for space sensors' sensitivity, leakage current, filters and the like change every time, so we always have to develop new, world class products.
For example, Hayabusa 2, which is scheduled to launch in 2014, is supposed to be installed with an infrared sensor that can measure wavelengths of up to 3 μm using indium arsenic as a semiconductor. Our company employs an original approach to developing infrared sensors capable of dealing with such long wavelengths.
And right now, we still use PMTs to measure the ultraviolet light range in space. Semiconductor sensors consume far less power, but we use electron tubes because semiconductors lack the resolution needed for the ultraviolet light range.
There are strict constraints regarding power conservation in space, and even though each individual PMT consumes only a very tiny amount of power, a satellite is equipped with many sensors, so you can't ignore the total power consumption and you have to gradually make things more semiconductive. It is essential for us to invent new techniques to meet these requirements.

--Do you make space sensors by hand?

Although we produce only small volumes of optical semiconductor sensors for use in space, we can't make them by hand. This is why we deal with this by using the same semiconductor manufacturing equipment to make large scale integration (LSI) circuits and memory in the early part of the process, and then in the latter part we produce our own automated machinery and such. We figure out ways to conduct each process to develop new production techniques so we can deal with things, like small lot production of various parts. 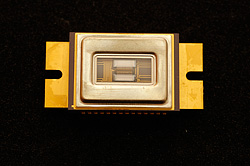 --How are the techniques you use for space different from those for other products?

For space, we've had to deal with unfamiliar things, along with making products that are durable enough to withstand the vibrations during launch and the drastically fluctuating temperatures, radiation and the like in space. We've worked on mass-produced optical communication systems for automobiles, which have strict requirements, but items for civilian use don't have to be so environmentally resistant. Instead, we are required to strictly reduce costs and guarantee the long term use.

--Does space engineering have applications in other businesses?

Space is like an environmental test lab, so manufactured products used in space have demonstrated reliability that have a positive effect on the reliability of other products.
We have a lot of challenging work because we're an R&D company, but still, compared to other fields we work in, in space, despite the tough requirements, we have developers who are so engrossed in their work that they don't even tire of putting in extra hours. And one result of our experience in development dealing with tight deadlines for new products is that it raises the level of our engineers a step above the rest.
I think our experience with space has helped us deal with temperature changes and vibrations in our optical communication systems for automobiles. And I believe our clients feel reassured about our products' reliability because of our space work.