NIPPI Corporation (NIPPI) started out building flying boats and training aircraft for the Japanese Navy in 1934. At the close of World War II , the company was testing the “Shusui” rocket interceptor. After the war, NIPPI built a mock-up of the Japanese-made YS-11 airliner, pylons and launchers for the F-15 fighter flown by the Self-Defense Forces (SDF) and more.

Recently, NIPPI has enthusiastically jumped into the business of manufacturing parts for non-Japanese airliners, including: inspar ribs and front landing gear doors for the Boeing 777; external flaps, main landing gear doors and fuselage frames for the Boeing 747; and the tail assembly end for the Airbus A380. NIPPI has particularly focused on carbon-fiber-reinforced plastic (CFRP) molding. During prepreg lamination, NIPPI workers manually layer the pieces and check their condition. It’s a job that demands expert skills.

NIPPI’s Aerospace Division in Yokohama is the company’s production base for aircraft and space equipment. Some of NIPPI’s pre-World War II structures–the administrative building and factory with its triangular roof–still remain on the premises. Space equipment is built and tested in a modern clean room in one section of the site. 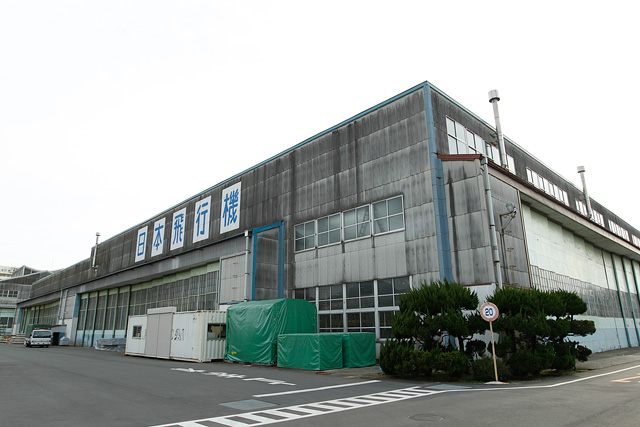 NIPPI’s Aerospace Division in Yokohama is the company’s production base for aircraft and space equipment.

This is the coilable mast used by the BepiColombo Mercury probe. It folds up to a compact size for launch. In orbit, the end, equipped with magnetic sensors, extends out to five meters to prevent magnetic interference on the probe’s main section. 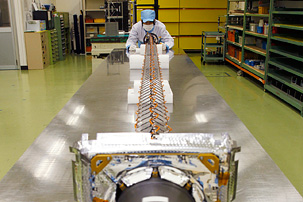 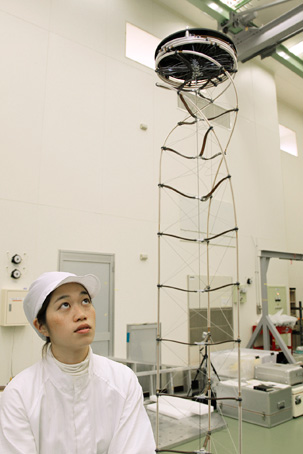 This demonstration coilable mast looks flexible, but the truss structure makes it surprisingly rigid when extended. 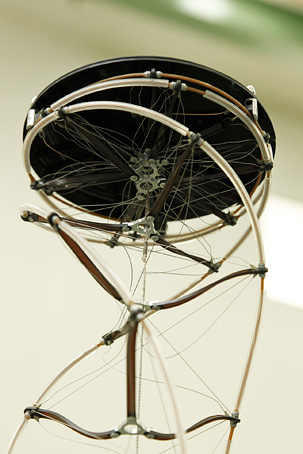 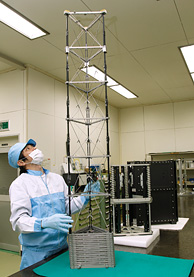 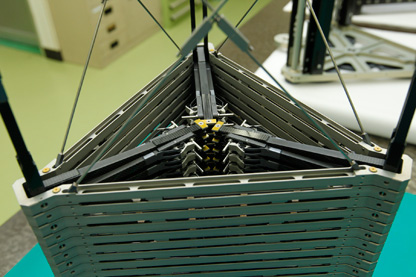 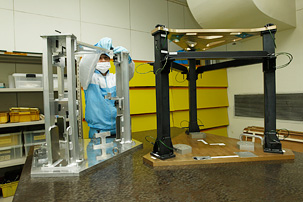 This jig, used to build the highly rigid mast, was made for the sole purpose of building that one piece of equipment, which can only be used for the ASTRO-H. 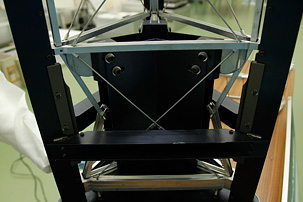 The photo shows a highly rigid mast used for demonstration. The actual mast will extend to deploy solar panels, antennas and the like

Here, a worker is assembling the wire antennas for the BepiColombo probe. The gold wire is the antenna, the end of which will connect to the ball shown in the photo on the right, then use centrifugal force to extend the antenna out to a length of 15 meters. The BepiColombo will have two such antennas.

This is the prototype of the device used by the Hayabusa asteroid probe to detach the re-entry capsule, which separated by employing a spiral-shaped “screw.” Giving the capsule spin allowed Hayabusa to release it safely. 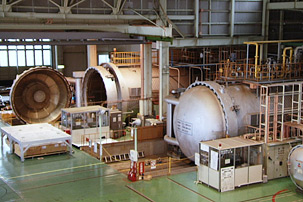 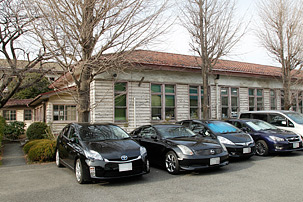 The aging main building, constructed in 1938, is unfortunately scheduled for demolition in 2012.

We're focusing on parts
with high added value
that no one else can make.

NIPPI CORPORATION
Aerospace Division Director Kohei Aizawa（Position is current as of the time this interview was conducted.）

--NIPPI was originally an aircraft manufacturer. Tell us how you got into the space business

NIPPI started out building flying boats and training aircraft for the Japanese Navy in 1934. The company was established in Yokohama, where we have our Aerospace Division. Apparently, the site used to have a naval munitions depot next door.
We were prohibited from building aircraft after World War II, so we barely survived by working on automobile maintenance and so forth, but in 1953 we got back into the aviation sector when we started performing repairs on aircraft for the U.S. naval forces stationed in Japan. We were involved in the YS-11 project to build a Japanese-made airliner, and in 1958 we completed a mock-up of the aircraft.
We entered the space business in 1963. Our first project was building the fins for the L rocket developed by the Institute of Industrial Science at the University of Tokyo. We were complimented on our techniques for building aluminum plates, which we had developed through our experience in aircraft manufacturing.
Even after that, we worked on rocket fins and fuselages. I joined the company in 1972, and soon after I joined, I was forced to use a calculator to compute coordinates for the rocket wing spar numerical control program.
During one of my frequent visits to the University of Tokyo, I was asked whether we could "develop an extension mechanism." The person who asked me said, "There's an extension mechanism called a coilable mast. Can NIPPI make one?"
They wanted to attach magnetic sensors to a satellite to observe auroras, but if the sensors were near the satellite, then the interference of the satellite magnetic would lower the observations' accuracy. So they wanted to make their observations with something that would normally be stored in a compact space, then when it's used, stretch out on the coilable mast--a hingeless extension mechanism--with the magnetic sensors on the end.This field was unfamiliar to us, but we managed to complete a coilable mast in 1986, which they put on Akebono, the aurora observation satellite that launched in 1989. The mast extended without a hitch.
Later we worked on creating a highly rigid mast that would extend into a frame to deploy solar panels and antennas, which was used on HALCA, the radio astronomy satellite. 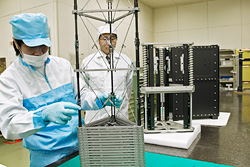 This is the mechanism that detached the capsule by using a spiral-shaped "spring." Kaguya, the lunar explorer, also used this device, but Hayabusa detached the re-entry capsule at the final stage of its mission when it returned to Earth, so I was really nervous at that time. I thought, "What'll happen if it fails?"
We also handled the extension mechanism for the sample collection horn that gathered the dust sample from the asteroid, so we were so incredibly happy when it was safely returned to Earth.

--How are space and aircrafts different?

First, the production setting in space is different from aviation's. Space equipment is worked on inside a clean room, and you can't perform maintenance on it once it launches, so the pre-launch preparations and inspections are extensive.
As for structural differences, in space we tend to focus on rigidity and being lightweight more than strength. For example, on an aircraft, the more layers of carbon-fiber-reinforced plastic (CFRP) you have, the stronger it gets, but space parts have to be both rigid and lightweight, so we use just one special prepreg layer.
Also, having engineers work in space field is an effective way to improve their skills. In space work, there's no mass production. Everything's a unique product. We have to design a new product every time. We even have to redesign our extendable mast for the Mercury probe because it has to withstand high temperatures, so we can't use the old one.
Meanwhile, our experience in aircraft design is helping us to develop our analytical techniques. That's had a positive effect on our space work, so there's a synergy between aviation and space.

--Which field do the new employees prefer: space or aviation?

The vast majority have wanted to work in space, especially since the Hayabusa mission. However, our space sales only make up around 5% of the total right now. That makes it difficult for us to place new employees where they want to be. 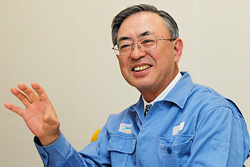 --What are your plans for expanding your space business in the future?

I think I'd like us to develop and produce more new products that only we can make and that have high added value, like the coilable mast. We need very original products if we're going to grow our space business.
I'd also like to use the composite material production techniques we've obtained through our experience with aircraft in space division. I think we'll continue to streamline what we've been doing, such as automating the composite material layering and molding we now do by hand and employing methods other than using autoclaves. Meanwhile, we'll also need to try our hand at complex processes that we haven't been able to apply thus far to mold special one-piece parts requiring no assembly.
Space is very fascinating, and our company has high hopes for the future. I'd like you to launch satellites more frequently so we can build a space business with lots of potential.