The Hotaka plant of Harmonic Drive Systems is situated in the middle of a rural landscape in Azumino City, Nagano Prefecture. The company relocated to this site in 1990 after the Matsumoto plant that it established upon the founding of the company in 1970 (in Toyoshina, Azumino City) became too small from the expansion of its consumer lines of operations. The company produces Harmonic Drive® units according to a variety of specifications at a rate of 40,000 a month.

The Hotaka plant is the only production site operated by the company in the country. While group companies produce goods overseas in the United States and Germany, they produce a mere 4,000 units and 3,000 units, respectively, per month. The Hotaka plant can be described as the largest supplier of harmonic drive gearing units for consumer use in the world today.

Products for space applications began to ship in 1983. Since a high reduction gear ratio is obtained in the first stage, harmonic drive gearing units are suited for space equipment where weight reduction is essential. Harmonic drive gearing units are used in a wide range of different applications in the field of space, such as the rotary shaft drive for directing solar battery paddles towards the sun, drive shafts for directing high-gain antennas towards the earth, and articulated drive mechanisms built into space robots. They are also featured in the axle drive mechanisms of exploration rovers sent to other celestial bodies.

Products for space applications and products for consumer applications are both manufactured on the same line at the Hotaka plant. While 40,000 units are produced monthly, a majority of these units are built by hand. Once processing is completed, size measurements are taken. The unit is then subject to more processing. A skilled engineer repeats this process to finish the product in compliance with a high degree of precision. 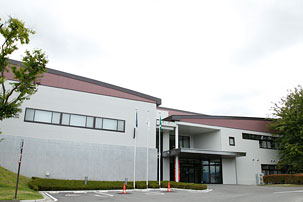 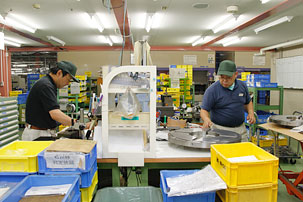 Raw materials are subject to an acceptance inspection. 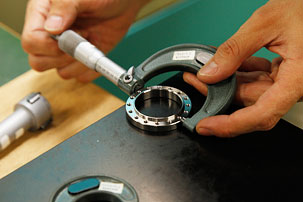 The dimensions of a circular spline processed with a lathe are inspected (left). The required degree of precision is obtained by repeating this process of inspection and processing over and over again. The holes on a flex spline are being checked for size in the illustration shown on the right. 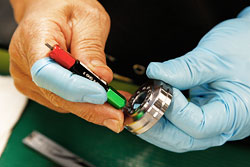 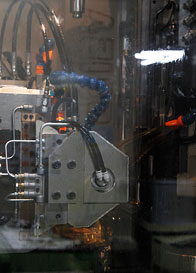 Using a gear-hobbing machine (left), the external teeth of a flex spline (right) are formed. 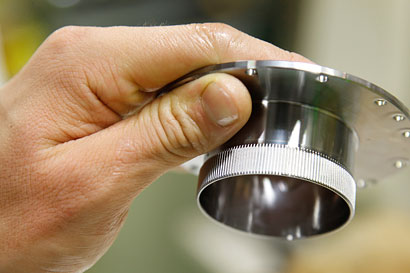 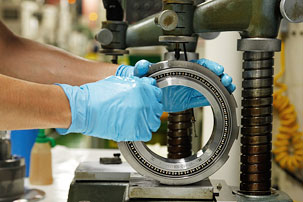 An elliptical wave generator into which bent bearings have been inserted is measured (left). The right illustration shows the manufacturing line for flex splines. 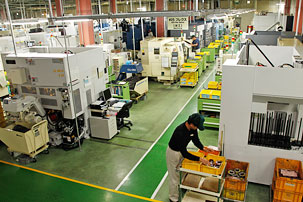 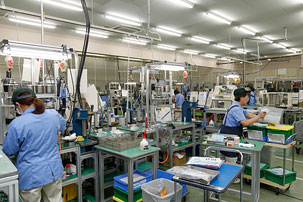 The assembly process. Rather than an assembly-line system, a yatai (food stalls) system characterized by the performance of all assembly steps for each unit by each worker has been adopted. 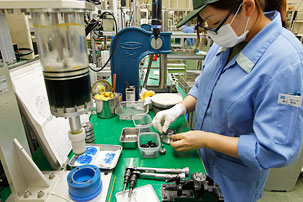 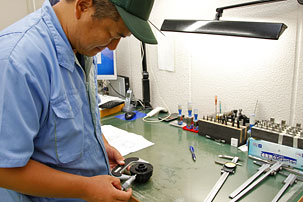 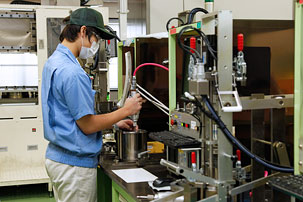 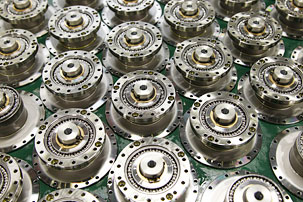 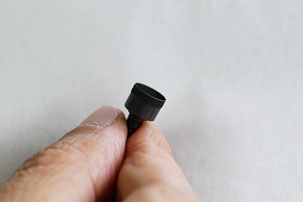 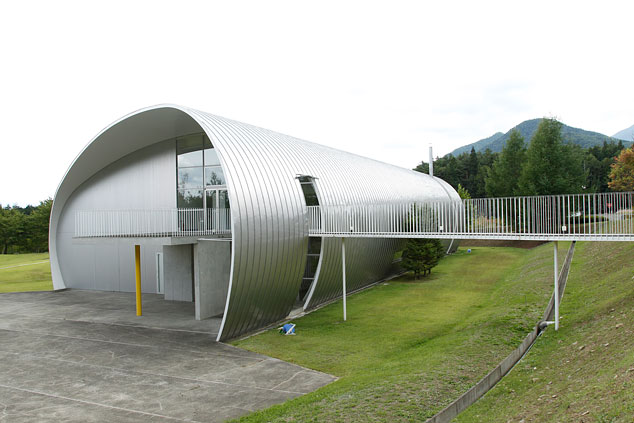 A uniquely shaped research laboratory. Research is normally conducted day and night without interruption in an environment maintained within half a degree above or below 23 degrees Celsius in hopes of improving precision by an order of magnitude.

--Your company is known for developing and manufacturing the unique reduction gear known as Harmonic Drive®. Could you please give us a brief overview of the Harmonic Drive®?

The Harmonic Drive® is a reduction gear known as the strain wave gearing system, which was invented by Clarence Walton Musser, an American inventor, in 1955. In a single stage, it is capable of dramatically reducing speed by a ratio of 50 to 1 or a ratio of 100 to 1. Harmonic Drive® is a trademark belonging to our corporate group.

The teeth counts of the outside internal gear and elastic external gear are nearly equivalent with a difference of only about two teeth. When these gears mesh, only the difference in teeth counts are transferred to the outside internal gear for each rotation of the rotor. By transferring only two teeth for each rotation of the rotor, you can achieve a significant drop in speed at a ratio of 50 to 1 in a single stage. And since the backlash (clearance formed between mounted gears) required for typical gears is not needed, this system is ideal for precise positioning applications.

USM, the company that developed and manufactured the strain wave gearing system in the United States, and a company known as Hasegawa Gear Works joined hands to allow Hasegawa Gear Works to launch the domestic production of the strain wave gearing system by introducing the necessary technology in 1964. In 1970, our company was established through a joint capital investment by both of these companies. Hasegawa Gear Works subsequently went bankrupt and various other developments unfolded in such a way that we currently stand as an independent company in capital terms. 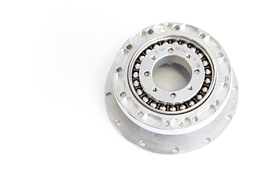 In terms of business, we were at a standstill back in the 1970s. Even in the United States, these products were originally marketed primarily for special space and military applications, such that few products were sold to meet consumer demand. From around 1978, however, industrial machinery—in particular, actuators for industrial robots—began to undergo a conversion from hydraulic motors to electric motors. Manufacturers wondered whether they might be able to find reduction gears offering large speed-reduction ratios that could be incorporated into machinery with limited capacity. This marked the point at which fortune started to smile on the Harmonic Drive®.

As we entered the 1980s, we began to receive a continuous flow of orders from industrial robot-manufacturing companies. We promoted the development of technologies in line with demand to increase strength, permit more precise positioning, and enable wiring through the center of the axle. Since the 1990s, the range of applications has expanded to include semiconductor manufacturing equipment for which precise positioning is required. These days, we can lay claim to 30 to 40 percent of the world market in the field of industrial robots. Our lineup now consists of not just the Harmonic Drive® reduction gear but also products integrated with motors and planetary reduction gears designed by taking advantage of our expertise in manufacturing the Harmonic Drive®. 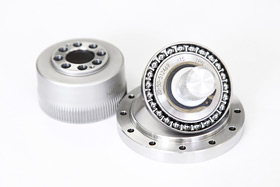 --So am I correct in suggesting that what you’re saying is that the scope of applications for a product that got its start as a product that met space and military needs expanded as a result of the role played by industrial robots?

You are correct. Companies belonging to our corporate group are making the Harmonic Drive® overseas in the United States and copies exist in the former Soviet Union and China. Nevertheless, it should be noted that we were the ones to expand the range of uses for this product in the consumer sector. While there is military demand, as well as a stable level of official demand for space applications in these countries, articles for delivery are subject to designations of strict specifications. For this reason, the development of technologies for consumer use was not effectively promoted.

--When did your company first begin to engage in space-related undertakings?

In the United States, the strain wave gearing system has been used for space application since the 1960s. Noted for its small size and large speed-reduction ratios, it has been primarily used for such parts as the solar battery paddle rotating mechanism on satellites.

For our company, the manufacturing and delivery of Harmonic Drive® units for space application as requested by Toshiba in 1983 represented the first order of this kind. In 1987, we began exporting to the United States. In 1990, we exported forty-nine Harmonic Drive® units for the FTS (Flight Telerobotic Servicer), a space robot operated by NASA. The FTS was a robot designed for external work on the International Space Station but plans along this line subsequently ended up being cancelled. Our products are also employed to further NASA’s exploration of Mars. Three Harmonic Drive® units were built into the Mars Pathfinder, a spacecraft for exploring Mars in 1996. Nineteen units were incorporated into each of the rovers—Opportunity and Spirit—sent to the red planet in 2003. Unfortunately, only one unit is being used with Curiosity, the latest rover to be sent to Mars, due to the large size of this vehicle. In Japan’s space sector, our products were adopted for the solar battery paddle drive mechanism, antenna drive mechanism, and robot arm of Kiku No. 7 (Orihime Hikoboshi), a rendezvous docking technology tester that launched in 1997. In addition, Harmonic Drive® is being used for the robot arm attached to Kibo, Japan’s science laboratory on the ISS (International Space Station), in certain end parts that are required to carry out detailed work.

--How do products for space applications differ from consumer parts used here on earth?

Fundamentally, Harmonic Drive® units are a component for which many customized models are produced in small quantities according to the orders received. For this reason, products for space applications are not necessarily produced on a special line. Indeed, we manufacture them on a regular production line. Products for space applications are all made with stainless steel in order to prevent them from rusting during use. Since requests for the use of stainless steel are sometimes received for consumer products as well, there are no essential differences in the tangible results of what we produce.
That said, however, the fact that products for space applications are subject to strict quality control and traceability requirements means that meticulous tolerance control and the strict maintenance of a record of the manufacturing history are essential. For the final shipping inspection, everything from burrs to measurements and performance is subject to such strict scrutiny that it can’t be completed in a single day. 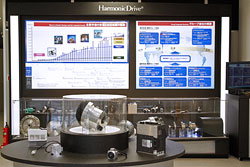 --So are you saying that you aren’t necessarily using any kind of special technology just because a product is intended to be used for space applications?

That is correct. Products for space applications are regarded as just another product for which many customized models are produced in small quantities. They account for 0.2 percent of total sales and we sell enough to break even. The biggest advantage that these products offer our company is that they give us the ability to emphasize that we also make components for space applications. Of course, this helps to burnish our reputation as an entity that manufactures products that meet very strict standards. Benefits are also seen in the recruitment of new employees. 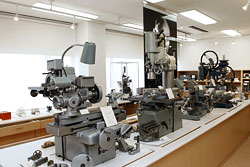 --Can we expect other exciting new developments in the future in terms of what you might be able to introduce for space applications?

NASA has used in excess of 3,000 Harmonic Drive® units to date. I therefore expect to see more products used in Japan. While products made of stainless steel are currently used for space applications, I believe that products made of steel—just as consumer versions are—will also suffice. This will allow costs to go down. It would be fantastic if this in turn leads to greater numbers of such units used in the future.