A Company that also harnesses resarch facilities
operated the Graduate School for the Creation
of New Photonics Intdustries.

Yoshihiro Takiguchi, representative director of this enterprise, is also a university professor at the Graduate School for the Creation of New Photonics Industries. This university aims to accept people as students who are willing to start businesses in new photonic industries and to provide support. That the research facilities of this university can be used in addition to the Azukimochi Development Center operated by this enterprise in Hamamatsu City, Shizuoka Prefecture, is a competitive advantage enjoyed by this R&D-based enterprise.

In the space-related field, this enterprise has been developing artificial opal using the ISS (International Space Station) since 2008. When this material is perfected, it is expected to have a wide range of applications as an optical element for use in optical communication devices and laser elements.

This enterprise is currently taking on the challenge of developing a telescope that can be mounted onto small satellites. The aim is to obtain expanded images with a concave mirror measuring 20 centimeters in diameter, take video clips with a camera, and send such data in real time to the surface of the earth. 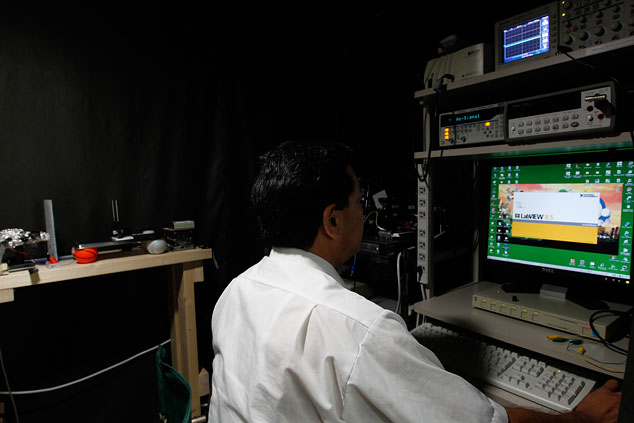 A simple darkroom somewhere in the Azukimochi Development Center. A simple prototype can be developed here. 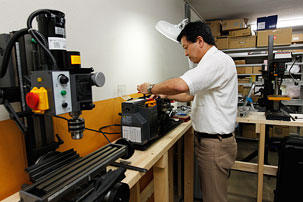 Next to the darkroom is an environment furnished with a lathe, miller, and band saw to enable devices needed for experiments to be made by hand. 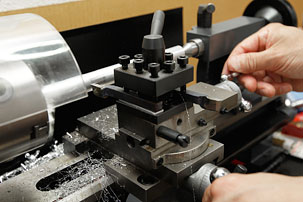 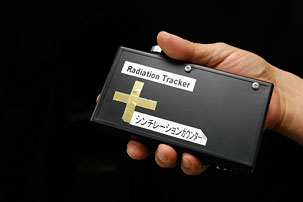 Upon finding out about the accident at the Fukushima No. 1 Power Plant in the wake of the Great East Japan Earthquake, representative director Takiguchi promptly developed an inexpensive radiation dosage meter for taking measurements in real time. Amounts of radiation were measured in Fukushima. Pictured here is a radiation dosage meter that was actually brought to Fukushima at the time. 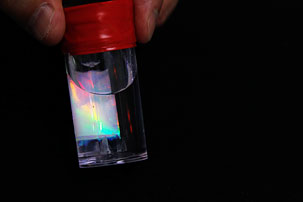 Representative director Takiguchi, who additionally works as a researcher with Hamamatsu Photonics, is also working to develop artificial opal on the ISS (International Space Station). This material is expected to be applicable as an optical element for use in household optical communication devices and lasers. 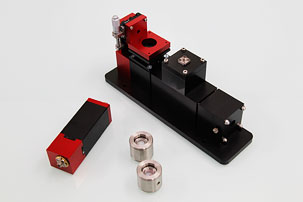 The TAK System is involved in the production of many spectrum measurement devices. These devices take many forms, depending on the wavelength of the light being measured and the purpose of use. 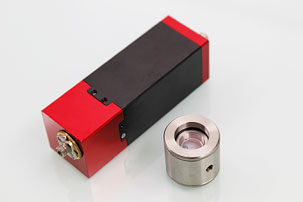 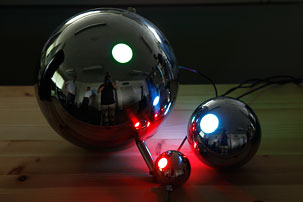 An integrating sphere is a device designed to reflect the light of a light source set up inside the sphere or light entering from outside the sphere along multiple paths and to measure the resulting luminous flux. 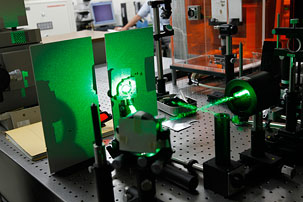 Also located in Hamamatsu City, the experimental laboratory of the Graduate School for the Creation of New Photonics Industries serves as the fundamental research laboratory for the TAK System. In this laboratory, a YAG (yttrium aluminum garnet) laser beam is directed at a metal surface. Material analysis is conducted by taking spectroscopic measurements of the resulting plasma. 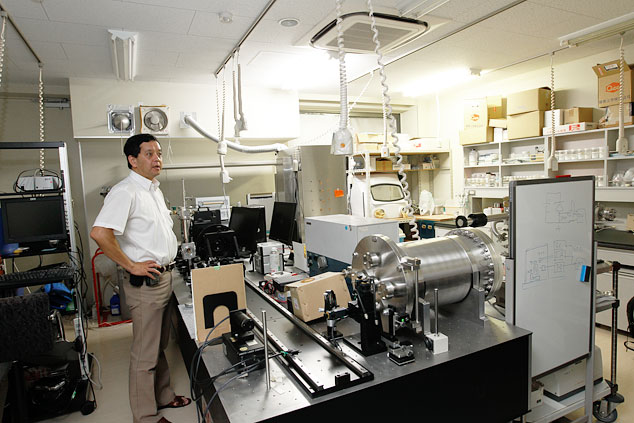 A laser interferometer for taking measurements of telescope mirrors and other such objects. Measurements with nanometer precision can be taken. Shown on the right side of this illustration is a vacuum chamber measuring 30 centimeters in diameter. It has been designed to create a pseudo-version of outer space for inspecting the environmental resistance of mirrors in outer space with a laser interferometer.

We have taken on the challenge of developing a small space telescope
by leveraging the competitive advantages of local companies
based right here in Hamamatsu.

I believe that, given my position as a professor, I must present myself as a model for my students. In this connection, I set up this company in 2007. I am also, as a researcher who has devoted many years of effort to developing light technologies at Hamamatsu Photonics, an employee of this company. I have been harnessing this experience to develop light-related equipment as visible light and ultraviolet ray spectroscopes and photon image measurement devices according to requests from companies, universities, and other such entities. Our focus is on developing prototypes of single-unit devices and instruments that large corporations would rather not take the trouble to develop.

What prompted this enterprise to get involved in space?

I have loved astronomical telescopes ever since I was a child. In 2009, the Hamamatsu Agency for Technopolis (currently known as the Hamamatsu Agency for Innovation) and others publicly pondered the possibility of doing something to invigorate small to medium-sized R&D firms and manufacturing companies in the Hamamatsu area and of doing something in the field of space. It was at this time that I felt that it would be interesting if we could see our earthly home from space by building a small satellite and mounting a telescope onto this satellite. This was what prompted our foray into space.

When we submitted an application for a plan formulated in collaboration with not just companies but also Shizuoka University to the Ministry of Education, Culture, Sports, Science and Technology, our idea for a satellite was rejected but our plan for a space telescope was accepted, whereupon we commenced with our project. An optical venture enterprise based in Jena, Germany, came to offer its cooperation on optical designs for this project to mark the moment this project became a decidedly international one. 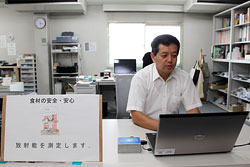 Yet, aren’t the hurdles for entry into a space-related venture significantly high?

Since the Hamamatsu area has attracted many manufacturing companies to set up bases here, pretty much anything can be produced if efforts are pooled. The real question is, for which field shall we harness such capabilities?

I believe that the light industry and the space industry will constitute the fields that will chart a course for the future. Telescopes for space applications might very well be described as something that perfectly encompasses both of these fields. What is important for taking measurements of light is the degree of measurement precision. The key to measurement precision is the precision of mechanisms supporting the system of measuring light. In this sense, these fields will allow the capabilities of local manufacturers to be considerably demonstrated.

Some companies specializing in machinery and mechanisms believed up until now that light and lasers belong in fields in which they do not. However, if we can present examples, such as our telescope for space applications, of the efforts undertaken by someone familiar, other local companies might be encouraged to try. If mechanical systems are properly developed, then optical systems will surely thrive. Fundamentally, these two technological fields are linked by an unbreakable bond.

They differ in terms of key technological points. We have to pay attention to such things as heat characteristics, strain amount, a wide temperature range, strong radiation, and the irradiation of sunlight. The result is a device that differs completely from conventional telescopes. This telescope produces enlarged images with a concave mirror but the mirrors we use here on earth cannot be used in space.

While mirrors of various types are already being used in space, mirrors with a diameter of approximately 20 centimeters for use with small satellites surprisingly do not really exist. And so, we decided that we would make them on our own. As long as we were going to make them on our own, we felt that we should create something that would surpass conventional mirrors for space telescopes by pursuing precision and weight-saving targets at the same time.

The mirror used with Subaru, an optical-infrared telescope at the summit of Mauna Kea, Hawaii, and operated by the National Astronomical Observatory of Japan, was designed to achieve weight-saving gains through the use of glass for the surface and a honeycomb structure made possible by carbon fiber reinforced plastic (CFRP) technology. We are currently in the process of developing a mirror with an aluminum-coated surface made by sintering ceramic into an extremely precise honeycomb structure. Since this ceramic is made domestically, this project is one for which all materials are made in Japan. We have already completed the prototype production of our mirror and are conducting vibration and radiation tests. We are also measuring the amount of gases emitted by the materials used for this mirror in a vacuum environment.

What are some of the issues facing your enterprise today?

Since the heat characteristics of the mirror are good, the issues we face have shifted to the heat characteristics of the structural parts for attaching the mirror and to matters concerning the mounting of the mirror onto a satellite. The degree of vibrations will vary greatly depending on the rocket transporting the mirror, and the specifications of the satellite will vary depending on the orbit that will be flown. For these reasons, the parts to attach the mirror to the satellite will also vary. Until a decision is made as to which rocket will carry the mirror, we will be unable to come up with a final design. Since we have subjected our mirror to vibration acceleration levels of up to 8 Gs through vibration testing, there should be no problems with launching it aboard JAXA’s H-IIA rocket. Since vibration levels can become quite high inside rockets operated by overseas space agencies, however, we will need to re-perform our vibration tests and make design changes to address the problem of insufficient strength if we were required to launch our mirror in such a rocket. Ideally, vibration levels could be lessened by having our mirror transported aboard the Kounotori, a cargo spacecraft designed to dock with the space station, to the ISS (International Space Station), and thereafter cast out from Kibo, Japan’s science module, by an astronaut.

Will the field of space constitute one of the pillars of your business in the future?

This is an area that will unlikely yield much in the way of profits. I expect to see losses for the foreseeable future. This statement applies not just to our enterprise but to other companies in Hamamatsu as well, I reckon. Yet, we do this because it is a dream shared by engineers and because it is something that stokes our passions. If companies in Hamamatsu could combine their manufacturing prowess, we could produce a space telescope featuring a camera and circuitry for about 30 million yen (which will cover the cost of the materials but not the costs of development work and labor). It would be wonderful if this project could help stimulate manufacturing companies in Hamamatsu. That said, I figure that we might start to earn some real profits once we enter an age in which we might see one or two hundred small satellites launched into space (laughs).