Harada Seiki was established by being split off from Harada Seiki Kogyo in 2007 as a company engaged in development operations in the fields of aeronautics, space, and defense. Each of the twenty-two employees of the company concurrently works for Harada Seiki Kogyo.

Harada Seiki’s parent company, Harada Seiki Kogyo, is a manufacturer of special-purpose vehicles in the automotive industry. They are gradually making inroads into prototypes as well and specialize in five-axis simultaneous machining and other examples of advanced cutting operations. Harada Seiki makes use of such technologies to process parts with a focus on the housing and driver for satellites.

Presently, sales for the entire group, including Harada Seiki and Harada Seiki Kogyo, amounts to approximately 600 million yen a year. The space equipment business accounts for 35 percent of the total sales of the group.

With companies based in the Hamamatsu area, which is attempting to expand into the field of space, joining forces, the company has taken up the challenge of developing rovers (for planetary exploration), ultra-small satellites, and small telescopes for space. 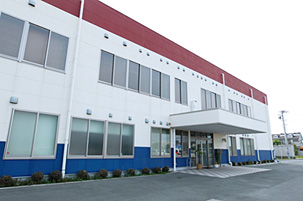 Measuring approximately 10,000 square meters in total area, the head office plant of the company began operating in January 2009. In order to limit increases in indoor temperature, special insulation material used with rockets has been employed for the outside wall. 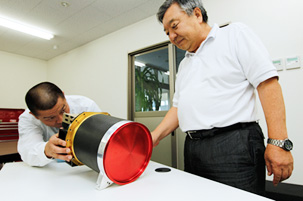 A hybrid telescope is currently under development. Harada Seiki is in charge of development. This project is being promoted in collaboration with the Graduate School for the Creation of New Photonics Industries. 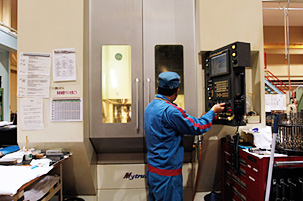 The company owns more machining centers (MCs) than any other machine tools in its arsenal. An MC for five-axis coaxial control is shown on the left while an MC for three-axis control is shown being operated on the right. 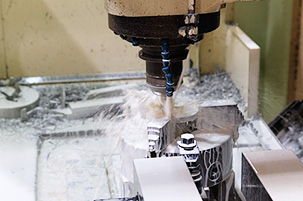 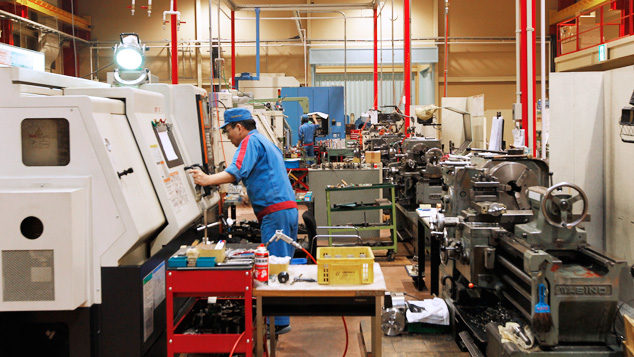 A lathe turning line. An NC lathe can be seen on the left side of this photograph while the right side shows a general-purpose lathe. One person engages in finishing work while using both machines. 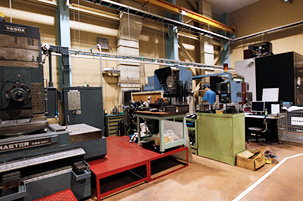 A precision processing room housing an array of high-precision machine tools, including an MC for five-axis coaxial control. 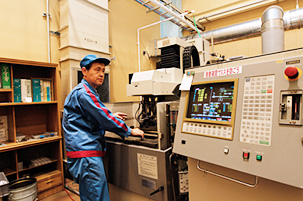 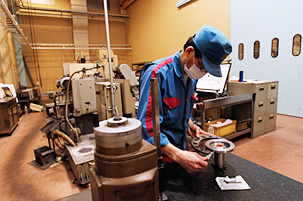 Polishing process. Polishing is repeatedly carried out while dimensions are measured until the required level of precision is obtained. 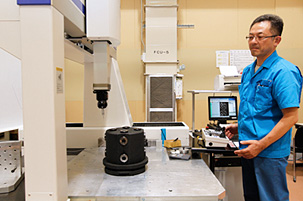 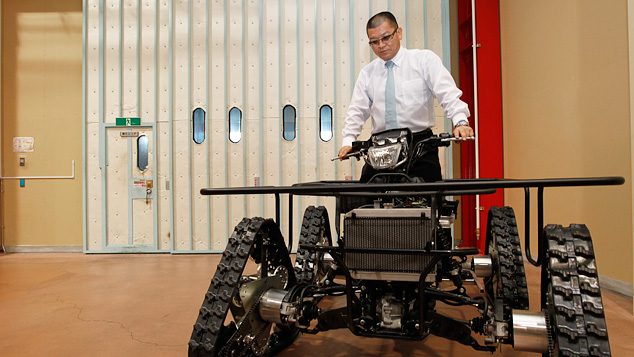 A prototype rover built by the company (vehicle for planetary exploration). The company is also building a prototype for an unmanned rover.

Having started out with the production of satelite parts,
we have taken on the challange ofdeveloping rovers and ultra-small satellites.

Harada Seiki Kogyo invested early on in five-axis processing to gain the ability to freely cut curved surfaces in order to accommodate the production of advanced prototypes. An expensive five-axis processing machine was installed, and CATIA, a true three-dimensional CAD/CAM (computer-aided design and manufacturing) system, was adopted even as others kept saying that a small to medium-sized company could not do what we did in terms of both pricing and capability. This was around 1990. That said, however, one cannot simply cut a three-dimensional form by tossing three-dimensional form data into a CAD/CAM system. To carry out processing that can pass inspection with experts, the accumulation of considerable expertise is required. As a result of coming by our pool of technology for simultaneous five-axis processing honestly, we were able to gradually become recognized for the high level of processing that this yielded. This technology represents the competitive advantage enjoyed by Harada Seiki Kogyo and Harada Seiki. Four systems for CATIA alone have been introduced to date.

--You appear to possess some absolute competitive advantages when it comes to technology for cutting.

Although BS 7799 was regarded as applicable to information security in connection with information processing, we are entrusted by clients with the production of zero-generation prototypes, in other words, with the production of prototypes at the very initial stage of development. Thus, we are given confidential information relating to development belonging to clients. For us, information security is most essential in this respect. Bearing this in mind, we approached the UK standards association and verified that the security of information on prototypes also comes within the scope of this standard. Harada Seiki Kogyo initially obtained certification for these international standards. Ever since Harada Seiki became an independent company, both companies have been regarded as having obtained certification on a collective basis.

--Why did Harada Seiki Kogyo decide to expand into the field of space?

What triggered our expansion was the presentation of our five-axis processing technology at a technology fair for small to medium-sized companies in Tokyo in 2000. Hamamatsu is a manufacturing town centered on automobiles and motorcycles. If an automotive or motorcycle manufacturer catches a cold, small manufacturers on the periphery will be laid down with a major illness. Fluctuations in orders are exceedingly huge. In order to stabilize our business, we wished to enter an industrial sector not tied to automobiles and motorcycles. That said, we are a company whose core business is cutting and we survive thanks to our competitive strengths in machine processing and cutting. We wanted to stand fast without losing sight of our core business. You should be able to identify cutting functions within any industrial field. With this mindset, we participated in the above-mentioned exhibition in Tokyo.

The fact that any small company could master CATIA and engage in simultaneous five-axis processing was perhaps impressive enough to have caught the attention of a major satellite manufacturer from whom we received a request for the production of a prototype sample. This involved the five-axis processing of an impeller blade according to data supplied by NASA (National Aeronautics and Space Administration).
With such a project, the level of technology can be ascertained by looking at how smoothly the surface can be processed. If you were to carry out such a job by normal means, you would produce a rough edge. The edge of the impeller blade that we cut was as fine and smooth as the blade of a sword. We thus passed the prototype production test given to us, which in turn subsequently led to the receipt of orders.
We are now involved in the production of satellite deployment devices, battery casings, and optical system frames. Harada Seiki was spun off from Harada Seiki Kogyo since a large percentage of our development work was tied to aeronautics and space.

--You are also developing rovers (vehicles for planetary exploration), aren’t you?

In 2005, JAXA officials visited manufacturing companies in Hamamatsu and concluded that the level of technology being wielded here was high. This led to the establishment of the Society for the Use of Space and Airplane Technology (SAT Society) in 2006 within the Hamamatsu Chamber of Commerce and Industry as part of the joint research group activities being carried out by local industrial clusters. In this connection, a discussion on how we could proceed was initiated. Hamamatsu is a town built around automobiles and motorcycles. Perhaps we could proceed with a focus on vehicles. I thus became the leader of a working group that decided to adopt rovers as a development theme. I admit that my own love of vehicles might have played a part in arriving at this decision [laughs]. We presented an unmanned rover outfitted with a triangular crawler at the ISTS (International Symposium on Space Technology) held in Hamamatsu in 2008. When we actually operated this rover, it was the talk of the event. We continued our development work after this event finished. With the latest model, we can use a wireless Internet connection to operate and control the rover by entering commands from a personal computer or mobile phone. We are also developing a manned rover. We consider the earth to be a planet and believe that this rover could potentially be useful at disaster sites where the footing would almost certainly be bad.

--Do you believe that space-related operations will translate into significant business for your company down the line?

If you were to suggest that space is not a moneymaking proposition, then you would, at present, be correct. Yet, I believe that aeronautics and space are fields for which growth can definitely be expected to a considerable extent in the future. Such expectations are huge if you were to bring the entire world into your field of view. Moreover, space is about dreams. Doesn’t it make you happy just knowing that the products that you make will be traveling to space?

We are also currently developing, in collaboration with the TAK System Initiative, a small telescope for observing the earth to be mounted onto an ultra-small satellite. With confidence in our manufacturing prowess, we will purchase commercially available electronic parts and build something cheaper and better by a country mile than any existing telescope for satellite or space applications. If the time comes that a hundred ultra-small satellites or more are launched each year, we expect that our inexpensive, small telescopes will prove to be a huge hit. If such a future were to unfold, then the commonly held notion that space does not yield profits will finally be put to rest.