6,000 liters of liquid hydrogen
an hour produced by only 3 operators

While hydrogen fuel has garnered attention as one of many new energy sources in recent years, when the H-IIA/B Launch Vehicles–liquid fuel rockets at the core of Japan’s rocket program–soar into space, they consume enormous amounts of liquid hydrogen fuel that uses liquid oxygen as an oxidizer.

Iwatani Corporation has been involved in the production of liquid hydrogen for over 30 years. The liquid hydrogen the company produces in the city of Sakai is transported on land and sea to Tanegashima.

In 1930 Iwatani Corporation got started selling oxygen, welding rods and carbide in Osaka. The company began working with propane gas after World War II, thereafter expanding its gas business. Iwatani now works with industrial gas–primarily liquefied propane gas (LPG)–for use in the energy sector as well as in industry, medicine and more. The company also does business in other gas-related fields as well as materials. Since 1975, Iwatani has been providing all of its liquid hydrogen for use as rocket fuel in the aerospace sector.

Hydro Edge, a joint venture involving Kansai Electric Power Company (KEPCO) and other investors, is an Iwatani group company that makes its liquid hydrogen. The company has the largest liquid hydrogen plant in Sakai, Osaka Prefecture, which produces 6,000 liters of liquid hydrogen an hour.

Liquefied natural gas (LNG) is one of the ingredients used to make liquid hydrogen. The Hydro Edge plant’s location adjacent to KEPCO’s LNG import base keeps down the cost of transporting the ingredient. The company also tries to save energy when making super-cold liquid hydrogen by using low-temperature LNG.

Although the plant, with an area of around 32,000 square meters,2operates 24 hours a day, most production is automated, requiring only four shifts of three operators each. 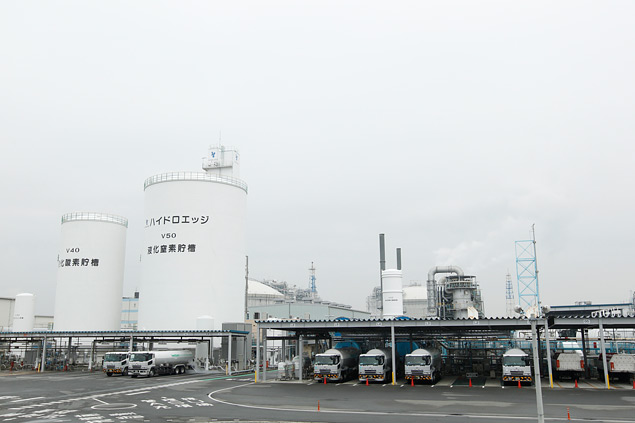 A reformer that produces hydrogen from liquefied natural gas (LNG). 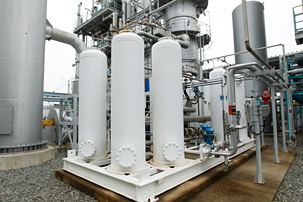 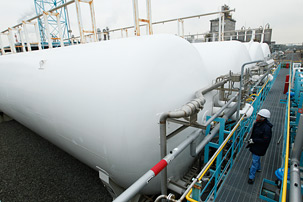 A liquid hydrogen storage tank. The plant has four 300-kl tanks in order to provide a stable supply. 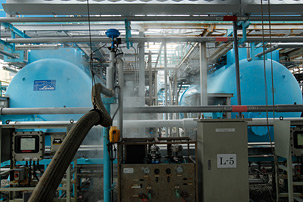 Liquefiers that turn hydrogen into a liquid use the energy derived from varying levels of heat produced by liquid nitrogen and by compressing/expanding hydrogen. 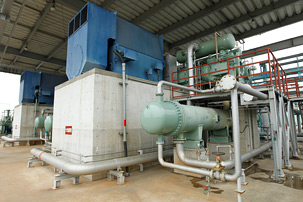 Hydrogen circulation compressors compress hydrogen that is then liquefied in the liquefiers. 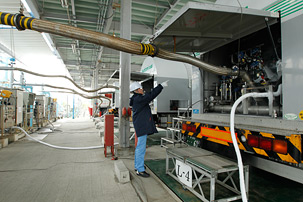 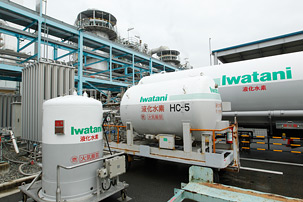 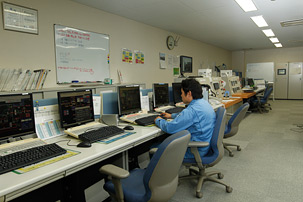 The control room is run by only three operators. 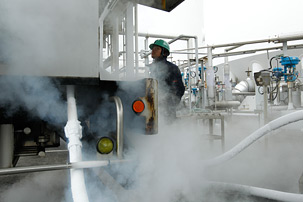 --What kinds of space-related products do you provide?

We supply liquid hydrogen fuel for rockets. Currently, Iwatani Corporation is singlehandedly responsible for an annual provision of up to 3,000 to 4,000 kiloliters of liquid hydrogen for Japan's rockets. This of course includes fuel for the large H-IIA/B Launch Vehicles, as well as providing all liquid hydrogen for engine testing and other trials/research.
We participated in the initial stages of the liquid oxygen/liquid hydrogen rocket engine project started up by the former National Space Development Agency of Japan (NASDA, now the Japan Aerospace Exploration Agency/JAXA). That was in 1975. Then in '78 we built a big new plant capable of producing 730 liters an hour in Amagasaki, Hyogo Prefecture. All of the liquid hydrogen produced was supplied to NASDA.
The first rocket that launched carrying our liquid hydrogen was the H-I in '86. Over the many years since, almost all of our liquid hydrogen has been used for aerospace. You could say that the space industry made the liquid hydrogen business what it is today.
At the time, we had a contract with NASDA for them to cover the expenses at our Amagasaki liquid hydrogen plant, in exchange for us providing them with the entire output. If we wanted to provide someone else like a private company with liquid hydrogen, we needed NASDA's permission first.

We started providing the private sector with liquid hydrogen in 2006, when we completed the plant for Hydro Edge, our production subsidiary (in Sakai, Osaka Prefecture). We and JAXA amended our contract to switch from being a JAXA contractor just producing liquid hydrogen for them, to a more normal business relationship.
Until then we had provided private firms with hydrogen gas, not the liquid type. Hydrogen's uses as an industrial ingredient include gas for epitaxial growth of semiconductors, an ingredient in light-emitting diodes (LEDs), gas for reduction atmospheres in the manufacture of liquid crystals, solar cells, automobile glass and other products, and more. Companies have been rapidly switching to liquid hydrogen, which is easy to handle and overall costs less.
Right now we provide private companies with more than ten times as much liquid hydrogen as we do for space. The result has been increased production and the ability to provide JAXA with liquid hydrogen that costs a fraction of what it did up until 2005, sometimes as little as one-tenth. 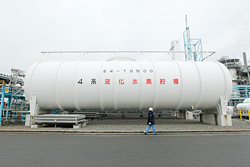 --So there wouldn't be a market for liquid hydrogen now if it weren't for its applications in the space sector?

We've been able to move ahead with technical development of liquid hydrogen production and provision because of our deal with NASDA, 30 years before the private sector started using it. As a result, we have opened the path for private companies to use liquid hydrogen because we have created the technology and infrastructure to very reliably provide large amounts of highly pure liquid hydrogen. 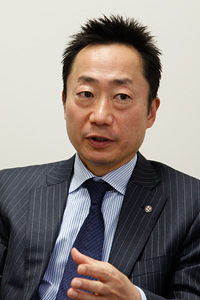 --Have your achievements in aerospace helped when building a market for liquid hydrogen among private firms?

It's easier to understand that way. When you explain it by saying "it's used to launch rockets," that alone wins trust.
In fact, there are strict controls for maintaining reliability in the aerospace sector, and we have to constantly keep records. By providing the same product (to the private sector), we earn customers' trust in the quality of our hydrogen.
We also have many people worry, "It's not going to explode when we receive or store it, is it?" But when we explain that we have never had a dangerous accident over our many years of providing and storing our product for the aerospace sector, then we can get them to relax.

--The prospects for the liquid hydrogen market look promising, don't they?

A major use for hydrogen in the future will be fuel-cell vehicles (FCVs). We expect to enter the age of the FCV in 2015 when automakers start releasing models. They'll have to prepare hydrogen stations for them. Right now, companies involved in the technology are getting together and talking, and first they're thinking of starting with a hundred or so stations. We also intend to build some hydrogen stations.
If there are two million FCVs on the road in Japan in 2025, then demand for hydrogen is forecast to rise to 2.5 billion cubic meters a year. Current demand for hydrogen is around 160 million cubic meters a year (one-fourth of which is liquid hydrogen), excluding what our plant supplies, so that amount will be over 15 times more. If that happens, we'll have to change the way we do things.
If that time comes, then we'll be able to provide liquid hydrogen to launch rockets much cheaper than now.